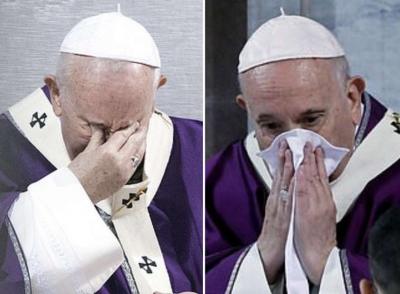 VATICAN CITY – Pope Francis postponed his engagement with Microsoft, IBM, and other technology companies on Friday, where he was to sign the Vatican's 'Rome Call for AI Ethics', which aims to promote ethical principles in artificial intelligence, according to the Holy See Press office.

This the second day of cancellations for the pontiff, with Vatican sources claiming that he has symptoms of a common cold.

“My Holy Father celebrated Mass this morning as usual, greeted the participants, but decided to postpone today's office audiences,” said the Direct of the Holy Sea Press Office, Matteo Bruni.

The meetings on the agenda at Casa Santa Marta, where the Pope resides inside the Vatican, are to continue as planned.

During Ash Wednesday ceremonies, observers noted that he was becoming hoarse while speaking. On Thursday, the Vactican said that Francis was "slightly indisposed," and had cancelled a trip to the Basilica of St Mary Major to hear the confessions of clergymen at the start of Lent.

The 83-year-old pontiff, “preferred to stay in the area near to Santa Marta,” the guesthouse in the Vatican city state where Francis has modest accommodations, according to Mr. Bruni.

The Vatican has not responded to questions from reporters whether Francis has been tested for coronavirus.