Barcelona snatch a draw to set up difficult task for Napoli 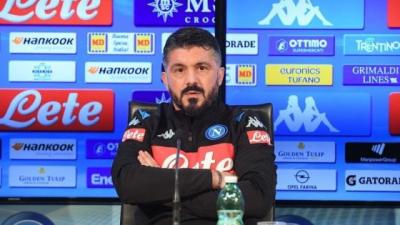 NAPOLI – The Azzurri held out the Catalan team in yellow to end the match 1-1, in what was a tense and cagey first leg of the UEFA Champions League last 16 round. The encounter took place on Tuesday at the San Paolo in front of 45,000 fans.

Napoli scored first through the Dries Mertens who struck on the half hour mark from outside the box in spectacular fashion. Napoli continued to press in the last minutes of the first half, but couldn’t find a finish.

It looked like Napoli might claim a historic victory over the Spanish champions, as they put all eleven men behind the ball and refused to give key playmakers like Leonel Messi any space.

However, Antoine Griezmann struck firmly into the top corner in the second half, after a neat pass from Messi finally unlocked the Napoli defense.

Barcelona went on to play more free flowing football in the rest of the second half, but couldn’t capitalise on the chances that came their way.

In the final minutes of the match, Barcelona’s Arturo Vidal was given two yellow cards for one incident, after he followed up an illegal two-footed challenge with a nasty head-to-head confrontation with a Napoli player.

Napoli did not have time to use their numerical advantage however, and so Barcelona go back to the Nou Camp with a crucial away goal. This sets up a much harder second leg for the Italian side which is set to take place on March 18.

“We know there will be difficulties but we’ll buy the helmets, the armour and we’ll go and play at Nou Camp,” said the combative Napoli coach Gennaro Gattuso in the post-match interview.