Kobe Bryant: The God in the Machine 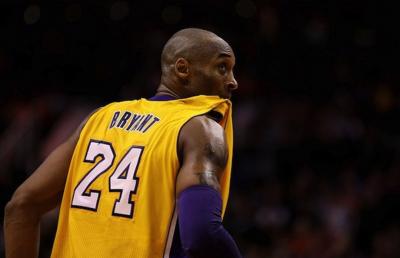 What was it about Kobe Bryant that made him a sporting great? Kobe was the third highest scorer in NBA history and was capable of incredibly creative shots. He scored by passing to himself off the backboard and dunking-home. He scored while facing away from the net and shooting blind over his head. He even scored from behind the backboard by shooting over the backboard. Overall, his shot selection was masterfully varied. Some were so low and fast that they threatened to give onlookers whiplash, while others had such hang-time that an onlooker might conceivably forget a ball was up in the air at all.

An explanatory trinity purports to answer the question. First, natural ability. Kobe, at 198 cm, had the height, and this was matched by a lean, lanky and hyper-athletic 96 kg frame. Second, relentless hard work. Kobe separated himself by way of early mornings and late nights, as well as hours spent doing analysis. Third, luck. Kobe was lucky to have outstanding physical and mental attributes in the first place, but was also lucky in more environmental ways, developing his game young over a seven-year spell in Italy, in Tuscany, Emilio-Romagna and Calabria.

You need all three to get to the top of professional sport, and Kobe, who died tragically in a helicopter crash on Jan 26, had them all. However, there might be a fourth element that accounts for some of what makes sporting greats like Kobe, and it might have something to do with ‘faith’. Kobe was a Catholic, but it is not his Catholicism that I mean to draw attention to here (after all, sporting greats are represented across multiple faiths). Instead, it seems that it is faith in a more general sense, and specifically the unquestioning aspect of it, that can bring about benefits for the professional sportsman.

To explain how this might work, two types of rules in basketball must be distinguished. There are institutional rules, which tell you how a game is played, (bounce the ball every step and a half) and there are strategic rules, which tell you how you should play a game (when shooting, don’t overarch your shot). The first type of rule always applies. The second type of rule does not. This applies for any sport.

There are moments of genius in sport that change preconceived notions about how the game can be played. Maradona’s wonder goal against England in the World Cup Quarter Final in the 1986; Muhammed Ali’s demolition of Cleveland ‘Big Cat’ Williams in 1996; Kobe Bryant’s 81 point-game against the raptors in 2006, which set the record in the modern era of professional basketball. These sporting greats all pulled off the unexpected, surprising their sport's respective commentators with what they did on the pitch, in the ring and on the court.

These sporting greats had ‘the golden touch’, or what might more accurately be called, ‘the instinctive ability to conjure up solutions’. Gary Kasparov, the grandmaster of chess who famously defeated the chess computer Deep Blue in the 1990s, once said that, “machines will not always win because they see better solutions, but because they make fewer mistakes.” Some people are able to see previously unthought-of solutions, and when they do they sometimes have to break strategic rules.

Sports are not solved games. Solved games, like chequers, are games that can be rationally thought through at every point of play until players know exactly what they should do and every other alternative is made impossible. Unsolved games, like chess, are games in which players can perform seemingly illogical moves in moments of brilliance, and they can do this because rational computation onlys get you so far. After all, the number of moves in chess is practically infinite. And if this is the case for something as formulaic as chess, then what does this mean for the chaos on the basketball court?

Thinking about infinite possibilities is probably quite a bad idea for a professional sportsmen, who typically tend towards the obsessive anyway. Kobe’s first coach, Gioacchino Fusacchia, recalled how the basketball legend cried when being taken off during a game at the age of seven. Lots of children are like that, but very few stay that single-minded into adulthood.

Infinity is perhaps the ultimate abstraction. God’s another. Thinking too much about the relationship between a moment of magic and whatever it was that allowed it to happen, is a risky business for an obsessive, because thinking too hard about what it is that enables you to do what you do is the last thing you want to do if you want to keep doing what you’re doing. To be caught in these reflexive abstractions is to risk never stepping back onto the court. Far safer to warily reach for the “it just came to me” adage in the postmatch interview.

A common coping-mechanism for the professional sportsman are superstitions. Superstition gives the sportsman the illusion of control over ‘the golden touch’. Basketball legend Michael Jordan wore his University of North Carolina shorts under his uniform every game. What was Kobe’s quirk? Perhaps the sleeve he wore on this arm. Perhaps the fact he sucked his shirt. In fact, it’s not clear Kobe had one. Once, in retirement, Kobe called superstitious fans “simple minded” for thinking that his analysis on the ESPN show ‘Detail’ was jinxing their teams’ results.

The type of superstition those fans exhibited though, is very different kind to that of a sporting great, because a sporting great uses superstition productively in order to self-regulate. The placebo effect is real, and the most interesting thing about it is that it works even if you understand it’s a placebo. None of this is to imply that Kobe didn’t believe in his Catholic faith. It is to say that if Kobe didn’t have any superstitions, his faith might have worked as a control mechanism – the type of closed-system that might be crucial in allowing someone to cope with sporting greatness.

Faith, then, seems to be a bad word for what I’m trying to describe. But ‘talent’, or ‘dedication', or ‘luck’, doesn’t serve to explain sporting greatness either. Machines alone cannot see the solutions that will eventually result in multiple NBA all-star awards and NBA championships. They all lack the God in the Machine.

The word ‘Grace’ comes to mind. Heirick Von Kliest once said that “Grace appears most purely in that human form which either has no consciousness or an infinite consciousness. That is, in the puppet or in the god."

It’s not clear in their moments of magic which one a sporting great is – a puppet or a god. But when the ball does finally drop back into vision, with a swish that says nothing but net, it doesn’t seem to matter much.