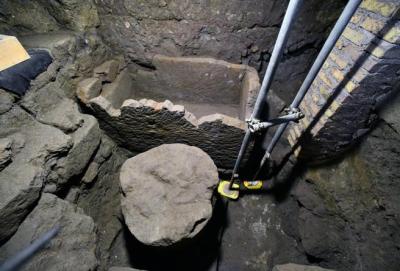 ROME – Archaeologists have found a sarcophagus in the Forum which could be the final resting place of the legendary founder of Rome, according to a press release on Monday from the Colosseum Archaeological Park.

Underneath the entrance to the Curia, the place where Roman Senators would have voted in the Forum, archaeologists have discovered an empty sarcophagus which measures 1.40 meters long and is believed to date back to the 6th century BC.

Investigations started a year ago on the basis of documentation from archaeologist Giacomo Boni at the beginning of the 20th century, which first fielded the idea that in the Roman Forum, a few meters from the Lapis Niger, a black stone ancient shrine that is thought to be a place of great significance, there might have been a ‘heroon’ – an underground tomb dedicated to the founder of the city of Rome and its first king.

The Roman Forum is the one of the most popular historical sites in Rome for tourists, and there is already a temple there dedicated to Romulus. The discovery of the sarcophagus was made in an area of the Forum that corresponds with literary sources, and, in the tomb itself, "it is no coincidence that the Lapis Niger, the black stone indicated as the funereal place because it was related to the death of Romulus, is located in axis with the underground chamber," the Colosseum Archaeological Park stated in a press release.

In Roman mythology, Romulus and Remus were placed in baskets and left to the mercy of the Tiber, but were saved by a wolf, and when they grew up they are said to have overthrown the tyrant king. A dispute then arose between the two of them as to which hill Rome should be built upon, and in the ensuing conflict Remus was killed and Rome was founded.

The excavation of the sarcophagus should generate new possibilities to engage the public with the history of Rome and the cult of Romulus. The mayor of Rome, Virginia Raggi, tweeted her thanks to the scholars who conducted the research, and said of the archaeological discovery that "Rome amazes us with its treasures."