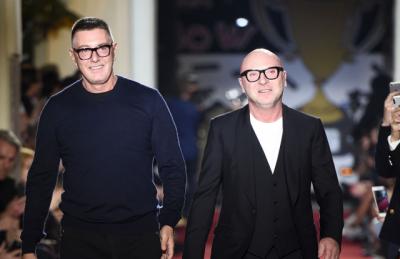 The luxury brand is throwing its financial weight behind a study led by Professor Alberto Mantovani of Humanitas University into immune system responses to Coronavirus SARS-CoV-2.

The study also harnesses the skills of Professor Elisa Vicenzi and Massimo Clementi, virologists at the San Raffaele Vita-Salute University who were the first in Italy to isolate the pathogen responsible for SARS.

“We felt we had to do something to fight this devastating virus, which started from China but is threatening all mankind," Dolce and Gabbana said in a statement. “In the face of these tragedies of such a vast scale, each action may seem insignificant. But Prof. Mantovani told us the African fable about a hummingbird: while all the other animals were fleeing from a fire in the forest, it flew in the opposite direction, continuing to bring water in the attempt to put out the fire. We understood that in any case it was worth doing something. Even a very small gesture can have enormous significance.”

The coronavirus SARS-CoV-2, which causes Covid-19 – an abbreviation summarising corona, virus and disease – affects the respiratory system and causes fever, coughing, breathing difficulties and, in the most serious cases, pneumonia and a serious acute respiratory syndrome.

It is similar to the SARS coronavirus (severe acute respiratory syndrome) responsible between 2002 and 2003 for 8,000 infections and almost 800 deaths, and to that of the MERS (middle-eastern respiratory syndrome), which between 2012 and 2019 infected about 2,500 people, especially in Saudi Arabia, causing nearly 900 deaths.

"SARS-CoV-2 belongs to the large family of coronaviruses,” explain Prof. Elisa Vicenzi and Prof. Massimo Clementi, virologists and teachers at the San Raffaele Vita-Salute University. “Some members of this family cause non-serious upper respiratory tract infections, while others, such as SARS-CoV, MERS-CoV and the new SARS-CoV-2, cause major diseases with a high mortality rate. The ability of some infected subjects to heal faster or have a less aggressive infection may depend on several factors, including the innate response that helps block the invasion of cells by the viruses, or stop early viral multiplication after infection. Hence the idea of ​​testing innate immunity molecules to verify their antiviral activity and understand how they interact with SARS-CoV-2, clarifying for example whether they interfere with the response of cells infected with the virus, even with unexpected mechanisms. This could pave the way to the formulation and development of strategies useful for patients.”