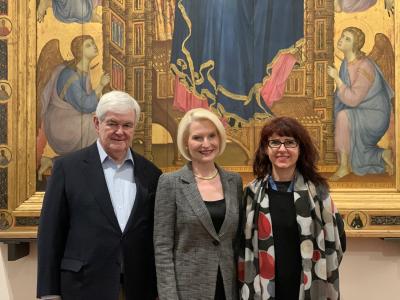 FLORENCE - The US ambassador to the Holy See, Callista Louise Gingrich, visited the Uffizi Gallery on Saturday to admire the masterpieces exhibited in their collection. Mrs. Gingrich, who has worked as a businesswoman, produced documentaries and written children's books in the past, also makes the time for regular trips to the Uffizi Gallery, reports a press release.

A great art enthusiast, this was Mrs. Gingrich's fifth trip to the Uffizi Gallery during her tenure as US ambassador to the Holy See. She was joined by her husband, Newt Gingrich, the former president of the United States House of Representatives, who is the author of numerous works of non-fiction and historical fiction, as well as having written as a commentator on American paintings.

The Uffizi Gallery is comprised of three galleries that together constitute one of the most important museums the world and is home to pieces from artists such as Raffaello and Caravaggio. It is divided into rooms that were originally set up in chronological order, to show works that stretch from the 12th to the 18th century.

Mrs. Gingrich was welcomed by the curator of the Uffizi Prints and Drawings Cabinet, Laura Donati. On the tour, the Mrs. Gingrich visited to a room dedicated to Giotto di Bondone, a seminal Italian painter and architect from the Middle Ages.

Mrs Gingrich then moved on to see the Gallery’s new rooms which have been dedicated to artists from the Renaissance and the paintings of the Catholic Counter-Reformation, according to the press release.

Mrs. Gingrich became US ambassador to the Holy See after being nominated by US President Donald Trump in May 2017.