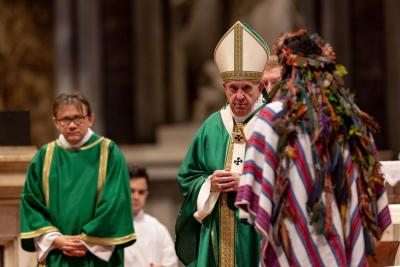 VATICAN CITY – Pope Francis’ ‘Dear Amazon’ papal document in relation to requests from the Amazon Synod, has been heavily criticised by the leading Catholic reformist movement ‘We Are Church – International’ (WAC-I). In a press release on Thursday entitled ‘Pope’s Response to Amazon Synod Fails to Respond to Church Members’ Needs’, the group has said that the response shows that “the Roman Catholic hierarchy lacks the courage and vision needed to address the real needs of the world and its people.”

The criticisms are centered on the continuation of the status-quo, which includes failing to open-up the priesthood to married men and failing to properly consider the ordaining of women while simultaneously proposing new forms of service. The lack of detail in the document was called “tremendously disappointing.”

The Chair of WAC-I, Colm Holmes, did praise Francis for his vision in the Amazon and for his stewardship of the human family and the planet, before going on to say that Francis “talks the talk but does not walk the walk when it comes to enabling the church to fully address the real needs of its members.”

The WAC-I have noted that while the papal document does show that the Holy See understands that changes are needed, it appears not to know how to bring about such change.

Francis’ statement talked about “the growth of a specific ecclesiastical culture that is distinctively lay,” and the WAC-I has said that this suggests that this means members of the church will continue to be increasingly responsible for “ensuring that their spiritual and sacramental needs are met, without relying on clerics to provide for them.”

The WAC-I, founded in Rome in 1996, is a leading advocate for structural change formed up of a worldwide coalition of national church reform groups.