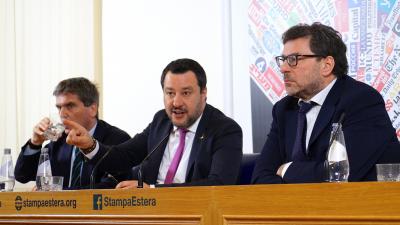 ROME – Italy’s far-right League leader, Matteo Salvini, has denied he was planning to host an event in Liverpool but has invited the mayor of the city, who accused him of being fascist, to Milan for "polenta and osso buco".

The former Interior Minister was responding to reports that his brand of xenophobic politics was not welcome in Liverpool.

“Our region has a long and proud record of openness and tolerance. Our diversity is our strength and we have long been a melting pot of different cultures, ethnicities, religions and races,” Steve Rotheram, the mayor of Liverpool said on Tuesday after hearing that Italy’s former deputy prime minister was due to speak at an undisclosed venue in Liverpool.

“Should he go ahead with his visit, I’m sure the only audience he’ll find here is one that won’t be shy in telling him what they think of fascists like him. He should learn the lessons that his far-right friends have on their past visits to our region: that bigotry is anathema, and hatred and intolerance will never be welcomed here.”

At a press conference in Rome on Thursday, Salvini said a trip to Liverpool had never been on his agenda but he hopes to visit the city one day.

He said League supporters in Liverpool were not arranging a political meeting but a dinner where “they go and eat fish’n’chips”.

Salvini then invited the mayor of Liverpool to dine in his home region of Lombardy.

“I will happily invite [him] to eat fish’n’chips or rather polenta and osso buco to show him that Milan is not invaded by hordes of fascists in black shirts, but is a quiet city that deals with work, fashion, business and culture,” Salvini said.

"I will take him to see Leonardo Da Vinci's Last Supper so he can see that the League governs in a totally clear-headed way."