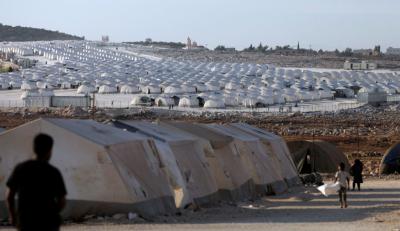 On Tuesday the WFP were forced to stop their food distribution because of distruptions to the movement of supply trucks from Turkey. Aerial bombardment on the city of Atareb has caused significant population displacement, adding to the 800,000 plus people displaced since December 2019, with many families having been forced to flee on foot during the winter months. Of those displaced, 80 per cent are women and children, reports the WFP.

“We are deeply concerned about the fate of thousands of families who had to leave their homes in freezing winter temperatures in search for safety in camps that are already overcrowded,” said a WFP Regional Director Muhannad Hadi. Families are still moving north towards overcrowded camps near the Syria-Turkey border. Over the past nine years of conflict, people across northwest Syria have already been displaced multiple times and rely heavily on humanitarian assistance.

In Dec. 2019, the WFP and partners launched an immediate response operation to provide food to all those displaced. Since Jan. 1 the WFP has provided emergency food rations to over than 300,000 displaced people. "This food can be eaten without cooking and is light to carry, so it supports families as they move from towns to camps in search of safety," read the press release.

Overall, the WFP and partners have distributed monthly food assistance to nearly 900,000 people.