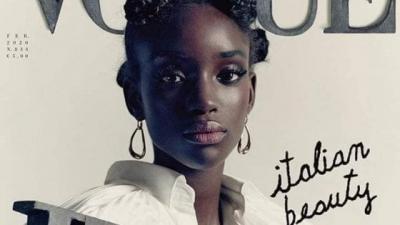 Arignano – A League councillor has been accused of making racist remarks aimed at Maty Fall Diba, the model who closed the Valentino fashion show and was on the front cover of the February issue of Vogue Italia. Although she was “a very beautiful girl,” she was not an “Italian beauty,” according to Daniele Beschin, the League councillor who has since been fired for the remarks. Mr. Beschin went on to say in a Facebook post that, for him, “a ‘Chiampese’ girl is a white and sunny girl.”

Ms. Diba, 18, has lived in Chiampo, a town in the province of Vicenza, for the last nine years after moving to Italy from Senegal. In a video interview with La Repubblica she said, "I don't want to talk about racism, I've always felt good here since I arrived in Italy at the age of nine. If there are people who write things… it's not my job to make them change their mind.”

The mayor of Chiampo, Matteo Macilotti, congratulated Ms. Diba for her Vogue success and said that she was the “beauty of the country,” as quoted in Next Quotidiano.

The Undersecretary of State to the Interior Ministry, Achille Variati has spoken of the shame the incident has brought upon the wider Vicenza area, and has declared his solidarity with Ms. Diba. "I hope that everyone realize how dangerous attitudes like these are for our society,” he said, as quoted in tgcom24. “Theories such as the purity of the race have stained history with blood.”

Since being fired by the Northern League, Mr. Beschin has claimed that the League’s response was to do with inner-party politics and political correctness, and has defended his remarks. “The same thing would apply if an Italian girl lived for a while in China. Even if she was integrated, she would remain an Italian beauty,” he said, according to La Repubblica.