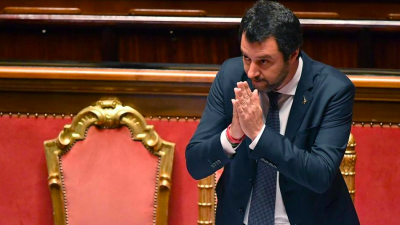 ROME – On Wednesday the Senate Chamber approved a request to begin court proceedings against Matteo Salvini for refusing to allow a migrant rescue vessel to dock in 2019, initiating a legal process that could take years to get through the courts, according to judicial sources. Mr. Salvini was the Italian Minister for the Interior from June 2018 to Sept. 2019, during which he blocked 131 migrants from disembarking off Sea Watch 3 in July 2019.

Of the major parties, the Democratic Party (Pd), Five Star (M5S), and Italy Alive (IV) were in favor of the trial; in opposition to were Forward Italy (FI) and Brothers in Arms (FdI). The vote will be finalised when the ballot-boxes close at 7:00 p.m. There are at least 150 senators in favour of starting criminal proceedings, reports Il Messaggero.

Representatives of the Northern League did not participate in the voting, and members of the government did not sit in the chamber either. Mr. Salvini made a reference to the empty benches of the government, and spoke of their “bad conscience,” although the choice has been said to have been made on a constitution basis, given that the matter pertains exclusively to parliament, reported Il Fatto Quotidiano.

If convicted under the anti-corruption Severino law, Mr. Salvini would likely be banned from holding public office. In the chamber, Mr. Salvini said that he had done nothing but defend his homeland, and accused his opponents of politicizing the courts and the government of inaction. "This migration policy has saved thousands of lives. The strategy of open ports has led to 15 thousand corpses over several years," said Mr. Salvini, as quoted in Il Messaggero.

Usually ministers have parliamentary immunity for actions taken while they were in office, but a committee voted last month to strip Mr. Salvini of his immunity. “I am absolutely calm and proud of what I did,” Mr. Salvini told reporters after the vote on Wednesday. “I will do it again as soon as I return to government.”