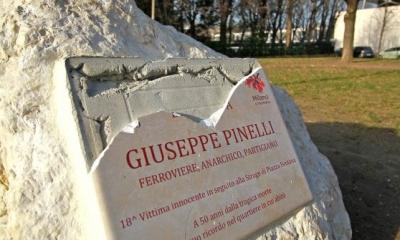 The plaque had been installed on Dec. 12 2019, on the 50th anniversary of the bombing of the Piazza Fontana, which killed 17 people and injured 88 more. The plaque names Pinelli as the 18th innocent victim due to his connected death three days later. Pinelli was wrongly arrested by the Milan police in connection with the attack and was illegally detained. During the night, and after a forced confession, he was seen falling from the fourth-floor window of the Milan police station.

His death was commemorated on the anniversary of the bombing by Italian President Sergo Mattarella, along with the Pinelli’s two daughters Claudia Pinelli and Siliva Pinelli. Silvia said at the event that “this gift reminds us that Milan is anti-fascist.” Mayor of Milan Beppe Sala also remembered the murder by saying that it was “a tragedy that should not have happened and the sense of injustice remains,” as quoted in La Repubblica.

Pinelli was born on Oct. 21, 1928. He was an autodidact who by age 16 had already become politically active within anarchist groups in Milan. Pinelli’s assassination has since become an important political and cultural event, with numerous books, films and plays dedicated to him, the most famous of which is Dario Fo’s Accidental Death of an Anarchist.

The 1969 bombing of Piazza Fontanais is strongly suspected to have been the work of ‘New Order’, a fascist group in Italy who had sought to discredit anarchist groups.

In 2020, the anti-fascist ‘Sardine Movement’ have formed and been mobilising in protest against what they see as an increasingly extreme far-right politics in Italy, with anti-immigration policies and the attacks on free media seen as modern-day threats.