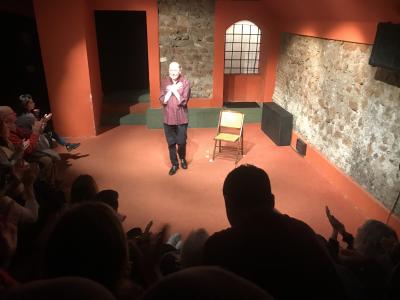 ROME – At the Teatro Arciliuto on Thursday, the New York experimental performance artist Edgar Oliver delivered a thought-provoking spoken piece called ‘In The Park.’ Mr. Oliver mostly performs in venues in New York, but was in Rome for an event organised by The English Theatre of Rome. The second of two performances was to be held at 8:00 p.m. on Friday.

When Mr. Oliver started to speak, in a voice both sonorous and flat, his accent was so particular and so full of elongated vowel sounds that at first it seemed affected. Mr. Oliver’s style of storytelling, that of delving into flashes of non-linear memories, also runs the risk of distracting or disorientating his audience. It is recommended that any analytical sense-making be avoided until after Mr. Oliver has finished.

The way to get into ‘In The Park’ is through Mr. Oliver's descriptions of places. New York City is described fondly as a grey and cloudy landscape, but Mr. Oliver seems at odds with the city, as if he were born to a different rhythm. In New York there is one place in particular where he can feel settled – ‘Prospect Park’.

It is through this dilapidated location that Mr. Oliver’s spoken performance comes alive, as he begins to describe his past experiences there, whether he was lying down in the sun, "stunned into stillness by the sun lying gold in the grass," or whether he was standing on in the rain, watching "the rain fall on puddles and the lake," and making him "think of fountains... in the rain."

In Boltimore, there is one such fountain, and this fountain has a prominent place in Mr. Oliver's mind. "The fountain is a round stone basin," he said, "and in its center sprouts a thicket of bronze bullrushes. Admist the bullrushes, a naked boy of bronze laughs and dances on a turtle's back. He is in the midsts of leaping, one foot raised behind him, poised on the toes of his other foot, balanced, as though leaping lightly on the turtle's back. The turtle cranes his neck, and gazes up happily at the leaping boy above him. All round the turtle and boy, jets of water sprout from among the bullrushes and fall arching into the fountain. All throughout my childhood, I loved this fountain. For me, the music of the fountain's waters was the music of the rain. I loved rain above all things. It was as if this naked dancing boy lived in a world of eternal rain."

Mr. Oliver encourages his audience to explore the importance of places such as this in our lives. Big cities, and our lives in them, often mean that when we are at our most together we are never further apart; it is from interconnectivity that we feel alienated. Although this seems to effect Mr. Oliver like it does any of us, Mr. Oliver seems to relish in the mournful invisibility that modern cities offer him. Mr. Oliver's experience of a sunny day in New York, seems to parallel the sense of isolation that anybody else might feel when travelling to a foreign country where they do not speak the language.

Like with a foreign city, Mr. Oliver reminds his audience that any city can be seen as an opportunity to walk amongst millions and remain entirely within your own head. Mr. Oliver draws out these inner-city contradictions at length through the spoken word, but also through his physical movements, such as the smooth movements of his arms that somehow trace an image of a jagged cityscapes. At one point in the performance, he said that he could have been a modern-day litter-picker, all the while miming the actions of a stone-age hunter that spears a fish.

With this urban setting established, Mr. Oliver began to explore his own introversion. Mr. Oliver is a people watcher. Even when he reached 27, he told his audience, he did not interact with many people. Instead, he looked from the park bushes with "wild eyes at the boys playing disk.” There might be a sense to which those who have the confidence to claim introversion cannot be truly introverted, because an introvert wouldn’t be able to say something as bold as that in the first place. If non-committal responses are a good indicator of introversion, then Mr. Oliver embodies this character trait perfectly.

What Mr. Oliver manages to convey in ‘In The Park’ is the personal cost of this introversion. Mr. Oliver describes his encounter on the streets of New York with a man named Terence. Terence had offered to pay for sex with Mr. Oliver, and watching as Mr. Oliver struggled to convey his struggle to convey his desires to Terence, was one of the most effecting moments of the night. Most scenes in ‘In the Park’ are self-contained vignettes that don't lead anywhere much, and although this scene was true to form (the two are said to have parted with nothing more than “a big hot wet kiss” on Mr. Oliver’s neck), the feeling Mr. Oliver gave while talking to his audience was that it could have gone somewhere. That in fact it never could have, and that the chance to have done differently is an illusion, was pressed home by Mr. Oliver once the vignette had finished, after he broke the longest silence of the show and moved unapologetically on to entirely separate moment in Prospect Park. Mr. Oliver is doing more than sharing moments that were never really shared at the time. What Mr. Oliver seems to be saying, is that any such moment in his past was just another moment, and that and the true cost of introversion might not be the moments that are missed, but rather the inability to decide between them. Disorientation permeates.

This disorientation is what Mr. Oliver tries to overcome through attempted conversation. This, then, was an intimate show. Indeed, what appeared to be happening up on stage was the Benjamin Button routine of reverse-aging – having first appeared on stage as an old raconteur, Mr. Oliver finished the performance in a balletic wide-eyed pose, perhaps claiming to have successufully sought out the young origins of his introverted self. But was his self-discovery satisfactory? Was even Mr. Oliver left satisfied?

Mr. Oliver claims both yes and no at different moments in the show. “I have remained true to you, that boy I once was,” he said. Then, later: “I wish I were that little boy digging in the dirt.” To try to keep one’s isolated, primal and introspective innocence even as one grows-up is the challenge Mr. Oliver has identified as his own. But in a piece that lurched between youthful episodes and a sexual awakening full of black men, it was not clear what was to be kept and what was to be thrown-out. Mr. Oliver recognises that he is no longer the boy he was, and that something has to remain lost, but what can he reclaim?

In one particularly Ginsbergesque moment, Mr. Oliver described himself as a child in the back of his parent’s car. “The car rocked through the night like a surging cradle. I press my face close up against the glass, and pear out at the land rushing past in the night, in the dimness of the darkened car I could still see a little of my reflection there in the window; that brow, the great dark gulf of those eyes, and beyond those eyes, within them, the land rushing past in the night." Even when he was young, the sense was that he was old. That this paralysing inner-turmoil also existed in Mr. Oliver's childhood suggests self-discovery to be an impossible task.

At times, Mr. Oliver’s performance makes you wonder if he hasn't entered a large and slow-moving whirlpool; if his introspection hasn't yet become inescapably solipsistic. At times, Mr. Oliver started to refer not only to the artist up on stage but also to the creation that the artist had had to produce to get up on stage. He talked more than once about writing about Prospect Park, from Prospect Park (when he’s not writing from McDonalds). “A few days ago I was in Prospect Park trying to write something… trying to write, well this…”

The German author Walter Moers once described the type of writer who can’t think of anything to say so they write about their inability to say anything, as “a trumpeter who has forgotten his music and toots away meaninglessly, merely because it's his job.” It attests not to their greatness but to their incompetence. Fortunately, Mr. Oliver did not linger long in the outskirts of solipsism, and when he did it in any case seemed genuine given the medium - with nods towards the act of creating this performance often serving as humorous relief, like he was trying to reassure his audience that he was fully aware of their trapped attention (there was no book to put down), and that he was doing his best to communicate something important.

Mr. Oilver’s performace remains a mystery to me, as I suspect it might be for him too. “Oh, I don’t know what I wish.” This thought is conveyed throughout the whole performance. The show is full of repetition, repeating words and ideas that seems to bewilder artist along with audience. If man has conflicting desires, it is the inability of man to locate these conflicting desires that troubles Mr. Oliver.

If there was one instance of resolution, it came when Mr. Oliver cried, “Don’t leave me, solitary boy!”, for I suppose that past boy cannot be solitary, not as long as Mr. Oliver continues to talk to him like he did.