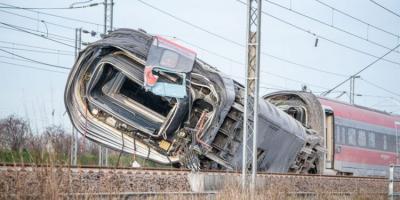 LODI – The Frecciarossa high-speed train derailed on Thursday at 5:35 a.m. and resulted in 30 injuries and the death of two train operators, according to local sources.

The accident occurred in the in the countryside area of Ligrava, as the train made its way from Milan to Salerno. The train derailed, hitting against another vehicle that was on a parallel track, and then against a railway building, according to Il Fatto Quotidiano. Ambulances, carabinieri, firefighters and helicopters were dispatched, reported La Stampa.

There is thought to have been maintenance work occurring at the exact point where the train derailed, and investigators are looking into whether there is a connection between the incident and the maintenance work. Italian Prime Minister Guiseppe Conte has said that "We are close to the families and are investigating the causes," as quoted in Il Fatto Quotidiano. Meanwhile, the leader of the Northern League Matteo Salvini took to twitter and said that “if anyone did wrong they have to pay.”

Angelo Borrelli, Italy's head of Civil Protection, told state radio that those wounded had been taken to the nearest hospitals, but that he had “no further information regarding the causes of the accident."

The Frecciarossa is the seventh fastest operating train the world, according to data published in statista. TenItalia have issued a notification stating that several trains from Rome and from Milan have been cancelled following the accident.