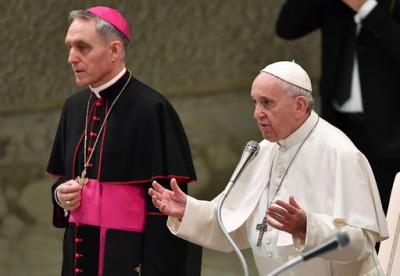 Gaenswein, who has been the private secretary of Pope Emeritus Benedict XVI since 2003, was reportedly being released from his duties as Prefect of the Papal Household to spend more time with the former pope.

“There has been no leave of absence, but only an ordinary redistribution of the various commitments and functions of the Prefect of the Papal Household, who is also particular secretary of the pope emeritus (Benedict XVI),” Vatican spokesman Matteo Bruni said.

Vatican observers suggest this is an elegant way to justify Gaenswein's removal from the pope's side.

Rumours regarding Gaenswein were fuelled by his noted absence from Francis’ general audience on Wednesday and the fact that he had not appeared in public for three weeks.

German newspaper Die Tagepost linked Gaenswein’s absence in the papal palaces to his involvement in the recent controversy over the publication of the book From the Depths of Our Hearts, co-authored by the Pope Emeritus and Cardinal Robert Sarah, in which the pair defend clerical celibacy.

The episode allegedly sparked a row in the Vatican.

The pope, who is considering the ordination of married men in remote parts of the Amazon to address the shortage of priests in the area, was reportedly “furious” over Benedict’s contribution to the book.

Benedict has since asked to have his name removed from the book.