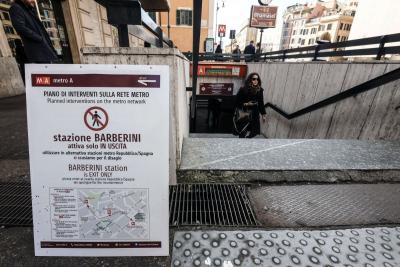 ROME –  Barberini metro station’s A line partially reopened on Tuesday, although commuters have only been able to exit the station, with operators from the Rome agency for transport (ATAC) turning away those who try to enter.

Barbarini was fully closed in March 2019 due to an escalator failure. Commuters can only exit the station from one access point, the square, because the access points onto via Veneto and via di San Basilio have been cordoned off. "In China they built a hospital in 10 days; here 318 days to repair escalators," complained commuters in a video report by La Repubblica. "They isolate the coronavirus earlier than they reopen the metro."

The Ministry for Transport had announced that Barberini would reopen several times, but each time the reopening was postponed. The latest postponement was on Jan. 24, when a technical check revealed that a brake on an escalator was not working.

There have been protests from commercial vendors who rely on Barberini to provide them with customers, but calls for compensation have never been finalised. Another compensatory act for measures such as the deduction of taxes has been filed, and Mrs. Virginia Raggi, the mayor of Rome, is currently considering refunds, reports Roma Today.

ATAC has not commented on when the full reopening of Barberini will take place.