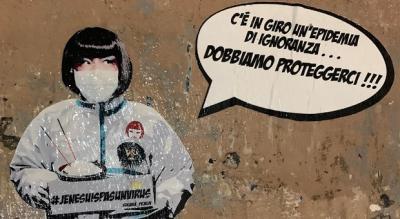 ROME – Coronavirus scare stories and fake news have inspired a mural that calls for unity at the entrance of a market in Piazza Vittorio.

A white-suited figure holding a bowl of rice is shown to be saying, “there's an epidemic of ignorance around, we have to protect ourselves." It is the work of street artist Laika, who is known for having done other murals, such as that of the former Roma football player Daniele De Rossi and Italian politician Matteo Salvini.

The image is of Sonia, or Zhou Fen-Xia, who is a well-known proprietor of 'Hang Zhou' restaurant. 'Hang Zhou' is one of the largest Chinese restaurants in Rome, but Sonia said that “now we struggle to fill fifty seats, while before the emergency coronavirus it was always full of Italians ", as quoted in Il Messaggero.

The mural appeared on Tuesday, the same day that the Italian press reported that stones had been thrown at Chinese students in Frosinone, which turned out to be fake news. The story had been spread by a teacher who had misused a translator app, and the Digos, Italy’s General Investigations and Special Operations Division, had already investigated the claims on Monday and decided that the claims were completely unfounded.

The conditions of the two Chinese nationals from Wuhan who were hospitalized in Spallanzani worsened on Tuesday however, and they are currently on “respirator support in intensive care,” according to local health officials quoted in La Repubblica, who have also reported that two more Chinese tourists visiting Naples were admitted to Cotugno hospital for tests, and that one of them has coronavirus symptoms.