Italians flown out of China by military aircraft 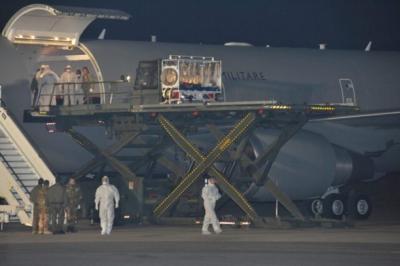 ROME – Italian nationals stranded in Wuhan due to the coronavirus lockdown have been returned to Italy, although one national had to remain due to signs of fever, reports Italian health officials. The Italian male, 17, was unable to board when pre-flight medical checks by local authorities revealed flu-like symptoms. He has been taken to a Chinese hospital and is being monitored by the Italian embassy, according to La Repubblica.

On Monday morning an Italian Air Force Boeing 767 landed in Pratica di Mare, a military airport in Pomezia, with 56 Italian nationals on board, 6 of which were children. They were accompanied on the flight by doctors and nurses. The protocol upon landing was that any passengers who exhibited coronavirus symptoms would be taken to Spallanzani hospital in Rome, whereas those that didn't exhibit symptoms would be escorted to Cecchigonal, a military hospital in Rome, according to La Stampa. Passengers will be kept in quarantine in Cecchigonal with extremely tight security for a minimum of two weeks.

The Italian Health Ministry has announced that a telecommunication conference will take place on Monday at 14.00 with the health ministers of G7 countries. Italian Minister for Health, Roberto Speranza, met with the Italian coronavirus task force on Monday morning to prepare for the discussion, which will discuss the possibility of “raising the level of controls on all ports and airports,” read a Health Ministry statement.

There are at least 500 more Italians across China who have requested that they be repatriated back to Italy, reports Il Fatto Quotidiano. Given the limited number of authorized flights operating between China and Italy, the repatriation of Chinese citizens from Italy has also commenced, with a flight from Rome to Taipei departing on Monday and another to Chengdu planned to depart on Tuesday, according to adnkronos.

There are currently over 17 thousand confirmed cases of the coronavirus, and the death toll has risen to 362, reported Giornalettismo.