Tahrir square the epicentre for change in Iraq

ROME – Iraq’s security forces have killed more than 600 protesters and wounded over 10,000 more, which raised questions concerning the likelihood of a Sunnistan or Shiitestan breakaway at ‘The Iraq Impasse’, a conference hosted by the Euro-Gulf Information Centre (EGIC).

On Wednesday, a room filled with journalists and ambassadors listened to Sofia Barbarani, who, for the last three years, has been reporting on the ground in Syria and Iraq. Based in Tunisia, Ms Barbarani is one of the few Western journalists who have covered the Iraqi protests despite the considerable personal risk involved. Ms Barbarani’s talk focused on the protests in Tahrir Square in Baghdad. The EGIC president and moderator for the evening, Mitchell Belfer, raised questions during the conference as to whether the protests were germinal and promised a more stable future for Iraq. The talk and high-level discussion was the latest in a series that underline how the EGIC has become the premier think tank on current affairs and regional trouble spots in Rome.

Tahrir square is famous for a monument commemorating the 1958 establishment of the Republic of Iraq. After the country was reclaimed from the grip of ISIS, Iraqis took to the streets in 2017 and 2018, in protest against the breakdown of infrastructure, high unemployment rates, and corrupt institutions. The protests in 2019 and 2020 have been even more intense, said Ms Barbarani, despite brutal suppression from the Iraqi security forces, who have intimidated, kidnapped and tortured activists.

At Tahrir roundabout, “the atmosphere feels more like a festival,” said ms Barbarani, who described the protests as peaceful, with dancing, singing, organised food tents, organised check-points, volunteer medical tents and even an open-air library. Protesters at Tahrir square often sleep there for days at a time in tents. They are of all ages, and there are plenty of women, even women from more conservative districts. Today’s protesters are “transcending generational and gender barriers,” continued ms Barbarani, for whom Tahrir is reminiscent of a state-within-a-state.

Six hundred meters down the road from Tahrir square, however, Khilani square offers sharp contrast. In Khilani square, the demographic of the protesters is mostly young, mostly male, and mostly from the impoverished and ghettoized suburbs of Baghdad such as Sadr City. The protests there frequently turn violent. Security forces use rubber bullets, tear gas canisters, and even live ammunition to fire on protestors. For Ms Barbarani, the difference between the two squares represents a “surreal dichotomy.”

This difference, this surreal dichotomy, speaks to certain paradoxes in Iraq’s attempted transition from a failed state into a stable one.

Mr Belfer, president of the EGIC, said during the event – “We know Iraqis have a similar set of priorities… from north to south, having a reduction if not a complete elimination of foreign forces, be they Iranian or American, is the first step to reclaiming sovereignty.” Ms Barbarani’s reports indicate that Iraqi protesters are unified in this belief, and that anti-Iranian sentiment is widespread in Tahrir square. Indeed, in recent months, both the Iranian consulate and the headquarters of the iranian backed militia Hezbollah have been attacked.

On Jan. 3, the Iranian general Qasem Soleimani, the architect of Iranian interference in the Middle and influencer of Iraq, was killed in Iraq’s airport by a US drone strike. Soleimani has only been stopped from meddling in Iraq because of the actions of an outside actor. Therefore, one must consider whether a sovereign Iraq is made more likely by narratives that promote sovereignty through self-sufficiency, rather than narratives that promote sovereignty through some degree of dependency.

From this, the question arises as to what compromises Iraqis might be willing to make, and to who, in order to bring about a stable society. For example, the anti-government protests in Tehran that followed Soleimani’s death and the downing of the Ukrainian International Airlines Flight 752 on Jan. 8, represent the views of many young Iranians whom likewise reject the status-quo in the Middle East.

If, however, the best way to bring about long-lasting change is through self-sufficient means, then Iraq is faced with another dichotomy with paradoxical implications. Ms Barbarani stressed that the glue binding protesters together has been a strong sense of national identity, especially since the religious figure Muqtada al-Sadr, a prominent cleric, distanced himself from the protests. Yet despite the protests being very organised in Baghdad, this level of organisation does not appear to be scalable across Iraq.

In Anbar province, for example, the few online activists who did voice their support of the protests were quickly silenced by local authorities, and the city of Fallujah is remarkably peaceful, having once been a battleground controlled by ISIS.  Ms Barbarani said that in comparison to Baghdad, her most recent visit to Fallujah resembled more of a holiday, and further disclosed that some Iraqis were even leaving Baghdad to relocate to Fallujah.

In the Q and A section of the discussion, Mr Belfer asked Ms Barbarani what it would take to make Iraqis come together given there were no silver bullet solutions.

The current generation in power in Iraq might have to die out first, came the response.

And yet, in Tahrir square, Ms Barbarani had detected “a sense of hope and unity which I think was missing before.”

That the organic protests in Tahrir can be imbued with this civic nationalist spirit, and yet remain divorced from nationwide political realities, remains a worrying and unresolved conundrum. 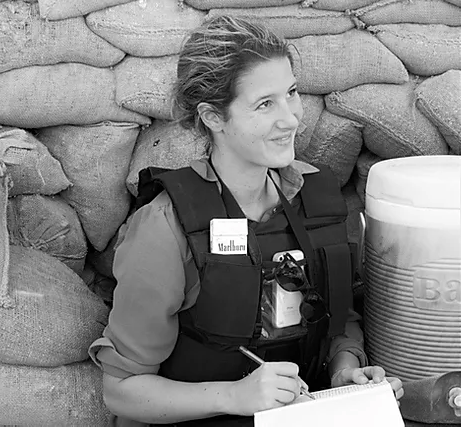