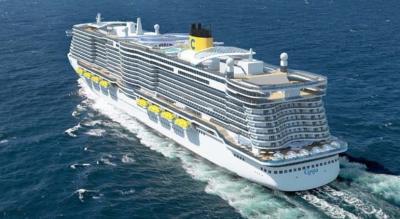 CIVITAVECCHIA – Passengers on board the cruise ship ‘Costa Smeralda' were prevented from disembarking Thursday due to fears of coronavirus on board, according to local health authorities.

More than 6000 passengers and 1000 crew were quarantined on board, after a Chinese woman from the region of Macau was put into isolation in the ship’s hospital ward. Her husband has also been quarantined and is being tested by doctors from the Spallanzani hospital in Rome. The couple arrived in Italy on Jan. 25, having flown into Milan from Hong Kong. "The situation is under control and at the moment there are no reasons for concern on board," said the Coast Guard Captain, Vincenzo Leone.

The ship tried to dock at 2:45 p.m. but the mayor of Civitavecchia, Ernesto Tedesco, opposed it after advice of medical professionals, reported Il Messaggero. There were British and Irish citizens on board, as well as over 700 Chinese and Hong Kong citizens, according to passengers on board the ship.

An Italian passenger on board the cruise ship said on Twitter that “we are stuck on the Costa ship without knowing the reason why (officially).” Passengers have also been voicing their complaints about the lack of internet on the ship, which means they have been unable to receive news, reports Il Fatto Quotidiano

The Costa Smeralda belongs to the Italian company ‘Costa Cruises’ which provides luxury cruises around the Mediterranean. The ship had stopped in Marseille, Barcelona and Palma, where it last docked before it arrived in Civitavecchia, a port city northwest of Rome where it is currently anchored to the pier.