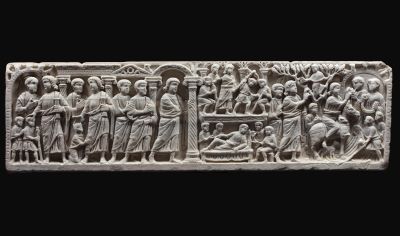 VATICAN CITY – A new exhibition of early Christian sarcophagi notable for their iconography has opened in the Vatican Museums, alongside an extension of the “Mater Amazonia” exhibition on life and the environment in one of the world’s most beautiful and vulnerable places.

Although the word sarcophagus tends to be associated with Egyptian mummies, they were also common in Ancient Rome and, as here, had some association with early Christian sculpture. In particular, during the pontificates of Popes Damasus and Siricius (between 366 and 399 AD), the figure of Jesus was used in a series of sarcophagi named for the central depiction of the healing of a paralysed man (John 5) at the Bethesda pool outside Jerusalem.

The Bethesda sarcophagi follow a clear iconographic pattern representing Jesus as miracle-worker. The exhibitions’ curators suggest placing such scenes on a sarcophagus is intended to signify “healing” from death, and that these were not only luxurious export items but helped spread the Christian concept of death across the Mediterranean and Europe – this type of sarcophagus has been found in Italy, France, Spain and the North African coast.

The Vatican has a permanent collection of Christian sarcophagi (or at least, as with much ancient sculpture, of the bits which survive) but the new exhibition focusses particularly on two sides from separate Bethesda sarcophagi, bringing them together for the first time, Director of the Vatican Museums Barbara Jatta said.

One was taken from a wall in the bishop’s palace in Ischia. Valentina Lini, who restored it, explained she used agar gel, made from algae, to carefully clean the sculpture before retouching it.

The second sarcophagus belongs to the Vatican and was found in the old, since demolished St Peter’s Basilica in the sixteenth century. It required a more complex restoration owing to previous attempts to retouch it – in one such restoration, eighteenth-century Italian sculptor Bartolomeo Cavaceppi could not resist “signing” it by changing the head of a figure of Jesus to make it resemble his own sculpture style.

Meanwhile, the Mater Amazonia exhibition is being extended. Opened following the landmark Amazon Synod, it focusses on the Amazon rainforest and the lives of the indigenous people living there.

Subtitled “The deep breath of the world” it is a multimedia exhibition that includes objects from daily life alongside videos to show how they are used, ritual and religious objects from the area, with photographs and quotations from Pope Francis and indigenous leaders.

It was the first exhibition to be set up in the new spaces of the “Anima Mundi” Vatican ethnological museum inaugurated in October by the Pope. He said at the time “I think that the Vatican Museums are called to become more and more a living "home", inhabited and open to all, with the doors wide open to the peoples of the whole world.”