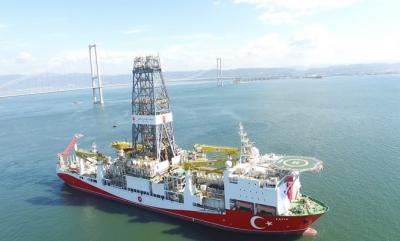 The Turkish provocation first occurred on Jan. 18, when the Yavuz left the port of Mersin in Turkey and started to explore ‘Block 8’ – to which drilling rights belong to the Italian company Eni and the French company Total, reports Corriere Della Sera.

The Turkish Ministry for Foreign Affairs justified their actions by stating that the“Turkish drilling ship Yavuz proceeded to license area 'G' in the south of the island last Friday to conduct its third drilling operation in line with the licenses granted to the Turkish Petroleum by the Government of Turkish Republic of Northern Cyprus (TRNC) in 2011.”

The TRNC is a disputed government which arguably does not have the legal grounds to provide drilling licenses. Despite EU measures adopted in Nov. 2019 to stop unauthorized gas drilling in Cypriot waters, no officials from the EU, Eni, or Total have reacted to the provocation. On Jan. 23, Government spokesman of Cyprus Kyriakos Koushos stated that technical data enabling the Yavuz may have been taken from a Turkish research vessel or from the Cypriot Environmental Ministry’s own website, according to local sources.

Turkey has become increasingly involved in oil disputes in the Mediterranean, in what is fast becoming a geopolitical struggle to control pipelines that transport Libyan gas to Europe. Turkish president Recep Tayyip Erdogan has lent his support to Fayez al Sarraj and the Government of National Accord, and has deployed Turkish troops to the region.

On Jan. 21, Libya’s National Oil Corporation (NOC) shut the Sharara oilfield, which accounts for approximately 25 per cent of the country’s oil production, due to a blockade by rebel general Khalifa Haftar’s forces. The head of the NOC said at a Chatham House event that “the international community has to understand that if it rewards, or even tolerates, those who break the law in Libya, then it will be complicit in the end of the rule of law in our country.”