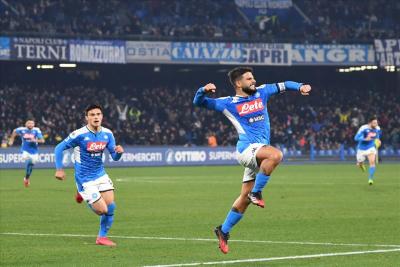 NAPOLI – Napoli damaged Juventus’ title dreams with a 2:1 victory on Sunday, and sent 40,000 of their attending fans into raptures at the final whistle, report local sources.

After an eventless first half, Napoli took the lead with two goals, the first scored by Piotr Zielinski and the second by captain Lorenzo Insigne, the latter of which “literally detonated the San Paolo,” said the official Napoli football site. Napoli held on to win the game, despite a last minute goal from Cristiano Ronaldo and one final overhead attempt from Gonzalo Higuaín.

The Napoli manager, Gennaro Gatuttso, had predicted in a pre-match interview that the atmosphere in the stadium would be extremely heightened, and talked about how much this game meant to his team, reported Corriere Della Sera. Higuaín, who missed Juventus’ last chance of the game, was loudly booed whenever he appeared on the maxi-screens in his first return to the San Paolo since transferring to Juventus, reported Napoli Magazine.

The Juventus manager, Maurizio Sarri, who had been manager of Napoli for three years until 2018, was not seen during the warm-up and only emerged from the tunnel once the game was about to begin, when he was met by a chorus of hostile whistles. A banner was fixed to the stadium insulting Sarri for having betrayed Napoli, according to informazione. After the game, Sarri then said of the Napoli team that he was “happy for those guys,” which has incurred the wrath of Juventus fans on twitter.

Reigning champions Juventus are first in the current Serie A standings whereas Napoli are tenth. This victory was not only unexpected given the two teams’ relative positions, but also due to recent form, with Napoli having suffered four consecutive home defeats.