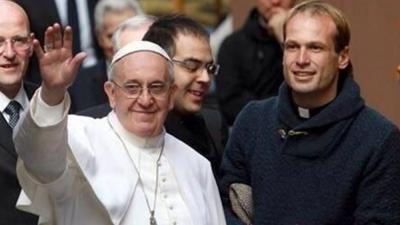 A Doctor of Theology, Fr. Aemilius, 42, has known the Pope since 2006. While he was a cardinal and archbishop of Buenos Aires, Jorge Mario Bergoglio made contact with Fr. Aemilius because he had heard of his work with street children. Fr. Aemilius is also the founder of Liceo Jubilar Juan Pablo school, set up in a very poor area in the suburbs of Montevideo.

Fr. Aemilius replaces Father Fabian Pedacchio, the Argentine priest who worked alongside the Pope from 2013 to 2019, and who returned Dec. 2019 to his post at the Congregation of Bishops.

The new secretary is already known to some because the new pontiff recognised him in the crowd at St Anne’s Gate in March 2013, inviting Fr. Aemilius to accompany him to the church where he was about to celebrate his first Mass after his election as Pope. At the end of the service, Francis introduced Fr. Aemilius to those present and asked them to pray for him, saying,

"I want to introduce you to a priest who comes from a long way away… who has been working with street children, with drug addicts for some time.”

According to La Repubblica, Francis wants roles in the curia to be carried out with a view to service and without career ambitions, so that the people he appoints can return to their previous work after a time.