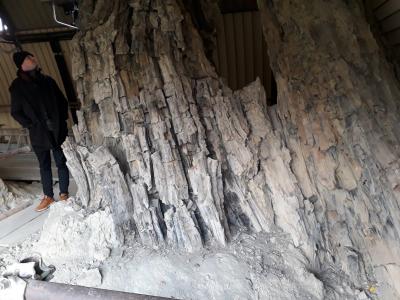 PERUGIA -- A list of Umbria's  unique claims to fame is practically endless: it is the birthplace of two of Christianity's major saints, St. Benedict, the patron saint of Europe, and St. Francis, patron saint of animals and the environment, as well as the tomb of St. Valentine, the world's most popular saint. It has been called the “Land of Water” with its rivers, health-giving mineral water springs and lakes, including the largest lake in central Italy. It contains the world's highest man-made waterfall, the  “horribly beautiful”, Marmore Falls (as the poet Byron described them), constructed by the Romans over two thousand years ago. Città della Pieve boasts Italy's most picturesquely named alleyway, the medieval 45cm-wide Vicolo Baciadonne (KissWomen lane). The medieval borgo of Monte Castello di Vibio has the world's smallest theatre, the charming 19th century Teatro della Concordia. Amazing feats of engineering live side by side in Perugia, ranging from the awesome 36m-deep Etruscan well, dating back to the 3rd century BC, to the 21st century Mini-metro, a futuristic system of monorails and escalators carved through the living rock of the Rocca Paolina, linking the historic centre with the modern city in the valley below.

Strangely, however, Umbria is not widely known as the home of a unique Natural Monument dating back over two and a half million years. The Dunarobba Fossilized Forest of Umbria is one of only three such sites in the world, and the only one to conserve its gnarled tree trunks, survivors of a lost world, standing in their original upright position.

A fossilized forest is not to be confused with the more numerous examples of Petrified Forest like the one preserved in the national park of Arizona and immortalized in a gangster film of the 1930s that launched Humphrey Bogart. The petrified forests are made up of ancient trees that have been mineralized and transformed into stone.  Fossilized trees, instead, are virtual mummies, dried out but conserving their natural organic properties. They are still wood, extremely rare examples of prehistoric wood, and therefore precious for scientific research.  There are only two other known examples of similar fossilized forests in the world: the Bukkabrany swamp forest in Hungary and the Axel Heiberg Island site in the Canadian Arctic.

The Dunarobba forest remains are tucked away in a hollow at the bottom of a former clay quarry, immersed in an uncluttered landscape of rolling fields, scattered farmhouses and distant hills. a couple of kilometres from the little town of Avigliano Umbro on the ancient Via Amerina road.

Some fifty colossal tree stumps were discovered by chance in 1980 by amateur palaeontologist Claudio Sensi, President of the Umbrian Mineral and Fossil Club. Buried in the clay, they had been almost miraculously preserved. Experts from the University of Perugia were called in and officially recognized the importance of the site. The quarry was subsequently closed and the first attempts duly made to conserve the trees, with the construction of temporary aluminium roofs to shield them, at least partially, from the elements,

Unfortunately, some thirty years later, no real improvements have been made. Lack of adequate funding has meant that the same flimsy roofs are still in place, leaving the sides open to the wind and driving rain, and exposing the trunks to attacks by wood-boring insects. The glass and cement shed, built to protect a couple of the biggest examples, was originally fitted with an appropriate climatic control system, but this has proved too expensive to run and is no longer functioning. Lack of proper surveillance has caused even worse consequences – some of the gnarled giants bear the blackened scars of fires set alight by vandals.

Nevertheless, visiting the site is an emotional experience.  A short walk down a rough country track with our guide, Daniela, took us through a padlocked gate and on to the rim of the quarry. In the hollow below, we could see the trees poking out of the ground, arrayed as if in battle formation, with their tin shields over their heads, and we only got an idea of their size when we went down close to them. The biggest example has a diameter of four meters. In its original state it would have been something like 50 or 60 meters tall, the equivalent of a modern high-rise apartment block. Botanists have established that these trees were conifers, belonged to a species similar to the rare Chinese swamp cypress and long extinct in Europe.

The little museum beside the visitor centre documents the kind of environment and life forms that characterized the area two to three million years ago, when this forest of gigantic conifers once grew on the banks of the Tiberino Lake, a vast body of water, nine times bigger than today's Lake Garda, that covered much of present-day Umbria. During this period, the climate was warmer, as testified by the collection of shells and fragments of bones of animals, ancestors  antelopes, deer and horses that were found in the vicinity, while in nearby Narni the skeleton of a rhinoceros was discovered while roadworks were being carried out.

The Dunarobba tree trunks have survived thanks to a combination of positive circumstances. Towards the end of the Pliocene era, there was a global climate change that caused dramatic changes in the environment. Temperatures cooled while the land rose and the sea receded. A gap split open in the Amerini mountain ridge and the lake waters gradually syphoned away into the sea. As the waters receded, the trees sank deeper and deeper into deposits of sand and clay. The process was so gradual that they stayed upright. Their tops eventually snapped off, but the roots and stumps remained preserved in layers of sediment that still feel spongy underfoot.

Daniela explained that scientists believe there are many more fossilized tree remains under the present site and hopes that one day it can be properly excavated.

At the moment, the Centro di Paleontologia Vegetale della Foresta Fossile di Dunarobba (to give it its full name) is run on a shoestring budget by a co-operative of dedicated enthusiasts. The Cooperativo Communita Surgente took over the sadly neglected site a couple of years ago and is striving to make it better known to a wider public. Co-op president Massimo Manini comes from a career in stage and cinema direction and is using his expertise to set up a programme of events to attract visitors and involve the local community. 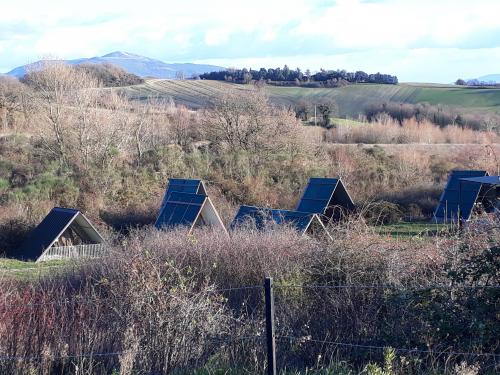