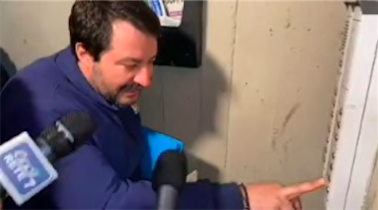 BOLOGNA – League leader Matteo Salvini has sparked a diplomatic firestorm after questioning Tunisian immigrants over the intercom at their home. Surrounded by live cameras at an apartment bloc in the Pilastro district of Bologna, Salvini can be heard asking whether this was the origin of drug trafficking in the neighborhood.

Reacting to the event on Wednesday, the Tunisian ambassador to Italy, Moez Sinaoui, described it as a “deplorable provocation made in an illicit way.” The vice-president of the Tunisian Parliament, Osama Sghaier, has also said that Salvini’s actions undermine relations between the two countries. “Tunisians in Italy pay taxes and those taxes serve to pay Salvini's salary. This is a purely racist gesture," Sghaier said, according to Il Fatto Quotidiano.

The event was filmed by a group of reporters during a regional election campaign in Emilia Romagna. Before leaving the apartment block, Salvini defended himself and said that he had acted as a citizen. Later, at a rally in Fidenza, he told reporters that he would continue to fight those who defended the privacy of drug dealers. “The pushers have no nationality, they are not black or white, from Parma or Tunisia… I fight them all,” he said, according to rainews.

Several Italian officials have publically denounced Salvini’s actions, including the Undersecretary for Foreign Affairs Manlio Di Stefano, the Minister of Infrastructure Paola De Micheli, the president of the Tuscany region Enrico Rossi, and the president of the Antimafia Commission Nicola Morra, according to rainews. By way of a facebook post, the mayor of Bologna Virginio Merola has said that Salvini is not just any citizen having once been Minister of the Interior. “I believe you should be ashamed, dear Salvini,” Merola said.

Ridha Mechergui, president of the Alliance of Tunisian Associations of Italy, is considering legal action against Salvini, reports Il Fatto Quotidiano. The secretary of the League has said in response to the scandal that “the fight against drug dealers should unite and not divide”.

Salvini also caused tensions with Tunisia in June 2018, when he criticized Tunisia for “not exporting gentlemen but convicts,” according to italiapopulista.