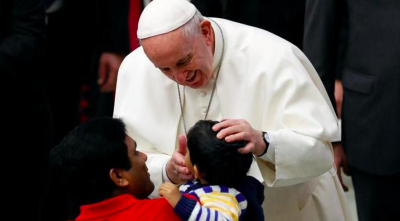 VATICAN CITY – On Wed 21 Pope Francis gave a speech that was scathing of those who defend "closed ports", according to Il Giornale. In the Paul VI Hall, the pope reminded his audience that the theme for 2020 was one of hospitality. He urged people to pray “for peace, for dialogue, and for solidarity between nations – gifts that are more necessary than ever in today’s world.”

Francis delivered his speech during the Week for Christian Unity, which runs from Jan. 18 to Jan. 25. The theme of hospitality has this year been promoted by the Church of Malta, and Francis made references to the humanity of the Maltese when the apostle Paul and his companions were shipwrecked off the island of Malta, La Stampa reports.

The pontiff made several global references as well, calling on the faithful in the Middle East not to be indifferent to tragedy and discrimination, as well as referring to past conflicts in his homeland of Argentina and to the upcoming celebrations of the lunar new year in China.

“All over the world migrant men and women face are faced with risky journeys to escape violence, war, poverty. Like Paul and his companions they experience indifference, the hostility of the desert, rivers, seas... But unfortunately they also encounter even worse hostility in men,” Francis said.

Italy has chosen hardline migration policies in the past. In attempts to close Italy’s ports to migrant rescue vessels, ex Interior Minister Matteo Salvini was involved in several standoffs and has since been accused by the Court of Ministers of abusing power, following the case of the Gregoretti, a coast guard ship refused entry in July 2019. In relation to the case against him, Salvini revealed in Dec. 2019 that he has copies of his communication with both governmental officials and the Italian bishops conference about the distribution of migrants, according to the Lega.

In 2019, Sea Watch 3, another migrant rescue vessel, was refused entry to the port of Lampedusa. The captain, Carola Rackete, was temporarily imprisoned after docking and was released in July 2019. As of Tues. 21, The Italian Court of Cassation has rejected the appeal filed by prosecutors against the decision to release her, according to judicial sources.