Italian President and Emir of Qatar agree to strengthen ties 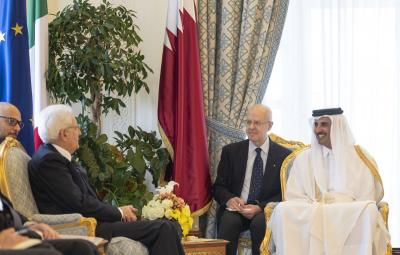 DOHA – Economic relations between Italy and Qatar are to be bolstered following Italian president Sergio Mattarella's meeting with the His Highness Emir Tamim bin Hamad al-Thani of Qatar. The two leaders talked over a breakfast and explored new ways the two countries can develop in the future, according to diplomatic sources.

President Mattarella arrived in Doha with an Italian delegation on Jan. 20 for a two day “business oriented” visit. During the meeting on Jan. 21, President Mattarella and HH Emir discussed the bilateral strengthening of economic ties and regional concerns, such as protecting the oil sector given recent geopolitical developments in the Gulf. The two countries are also brought together through their support of Libyan Prime Minister Fayez al Serraj and his attempts to bring stability to Libya.

After HH Emir had honoured President Mattarella with a breakfast, President Mattarella and his delegation were given a tour of the national museum of Qatar, and inaugurated an exhibition of manuscripts called ‘Between East and West. The Angelic Library in Doha.’ The cultural exchange between the two countries will last until Feb.19.

The meeting was also attended by 12 Italian CEOs, including managers from Eni, Saipem, Leonardo and Fincantieri. The economic ties between Italy and Qatar are long established. Italy has sold 6 billion euros in fighters, 4 billion euros in warships and 3 billion euros in helicopters, according to startmag. Qatar is one of Italy’s largest foreign investors, and Italy is Qatar’s eighth largest trading partner, with over 1 billion euro trade exchange between them, according to Qatar News Agency.