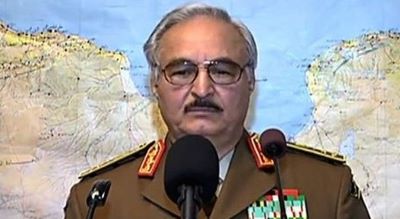 ROME – Libya’s oil production has come to a standstill as General Khalifa Haftar shuts down oilfields to increase pressure on the UN-backed Government of National Accord, diplomatic sources said.

The state-run National Oil Corporation (NOC) said forces under Haftar’s command had blocked oil exports from five ports along with an oilfield pipeline to such ports. The NOC have declared force majeure on crude loadings from the Sharara and El Feel holdings.

Haftar’s actions remove over 1 million barrels of oil from the market per day, Il Sole 24 Ore said, which is likely to affect Italy – in 2019, 12.1 per cent of Italy’s crude oil imports came from Libya, according to the Oil Union.

Italian company Eni, which holds 33 per cent of the El Feel oilfield, has confirmed that production has been partially reduced following the closure of a valve along the oil pipeline, Il Messaggero said.

Oil prices have not been seriously affected despite a brief rise on Monday, with Brent crude up 1.3 per cent to 66 US dollars although soon falling back to 65.

The UN support mission in Libya (UNSMIL) issued a statement Saturday expressing “deep concern over current efforts to disrupt or impair oil production in Libya” and warning of “devastating consequences first and foremost for the Libyan people who depend on the free flow of oil for their well-being.”