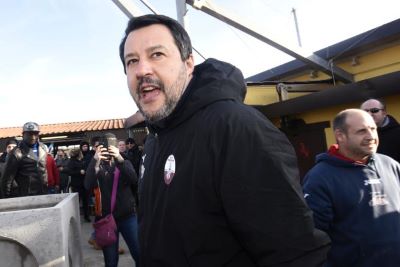 ROME – A Senate committee voted Tuesday to remove League leader Matteo Salvini’s parliamentary immunity to allow him to face trial for kidnapping over 100 migrants kept aboard a ship in July, political sources reported.

The decision on whether Salvini will go to trial now rests with the Senate, expected to vote on the issue on Feb. 17.

Salvini, as interior minister under the first government led by Italian prime minister Giuseppe Conte, refused to allow 100 migrants onboard the Gregoretti coastguard ship in the Sicilian port of Augusta to disembark.

The vote in favour of removing Salvini’s immunity split entirely down party lines. Members of the committee who are part of the government’s majority – senators of the Democratic Party, Five Star Movement and Italia Viva – did not appear. The five League senators voted in favour of putting their leader on trial, on Salvini’s instructions, while senators from parties allied with the League – Forza Italia and Brothers of Italy – voted against, causing an even split.  Those against keeping Salvini’s parliamentary immunity won due to regulations on tied votes.

Salvini’s strategy is to gather popular support by facing trial for what he portrays as defending Italy’s borders. He has said he is “ready to go to prison” over the case. Judicial sources say he could be sentenced to 15 years.

The League has launched a hunger strike campaign called “Fast for Salvini” in solidarity.

With critical regional elections in Emilia-Romagna on Sunday, opponents are accusing Salvini of playing the martyr to increase support, political sources said.

Meanwhile, Conte has stated the Gregoretti decision was entirely Salvini’s and he was not involved. Conte was prime minister at the time over a League-Five Star Movement coalition government, from which Salvini withdrew support – a move that backfired when the Five Star Movement allied with the Democratic Party to form a new ruling coalition, in which Conte is again prime minister.