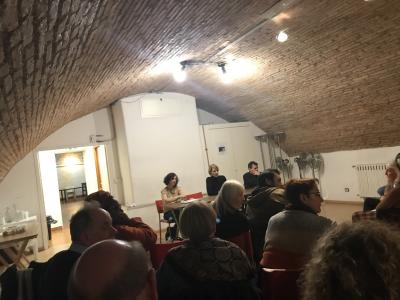 In the crypt of the All Saints Anglican Church, HE Morris gave a talk to British citizens living in Rome, explaining that the Withdrawal Agreement would guaranteed citizens’ rights until the end of the implementation period under international law. During the talk, questions from the audience brought several unresolved issues to the fore.

One audience question concerned the ability of British expats to vote in local elections. The ambassador confirmed that in the current situation specific rights such as this one would be lost. “However, we are going to be seeking to do a bilateral agreement with Italy and other countries. We have already reached a bilateral agreement with Spain. This would reintroduce the rights of UK nationals resident in Italy to vote in local elections,” HE Morris said.

Several questions were asked on whether there was any information regarding the application process for new residency documents. “We don’t know yet all of the practical details of what that process will look like, but the Italian government has committed to coming forward with those details this month. We can’t be very precise with you today on where you need to go, when you need to go, and what you need to do,” HE Morris said.

Another issue concerns the right of British residents in Italy to return to the UK with non-British family. Currently, March 2022 is the cut-off point for non-British family members of British citizens to apply for British residency under the EU Settlement Scheme. Afterwards, UK National immigration rules will apply and application fees cost thousands of pounds. One questioner asked if the UK government was likely to give concessions, especially to marriages that had existed prior to Brexit. “You’re right, to be eligible under the Withdrawal Agreement set of rights that cut-off is March 2022,” said HE Morris. “What happens after that is subject to the UK’s new immigration rules which are under consideration at the moment.”

The right to freedom of movement, healthcare, social security, and that of family members and future children, will continue to be protected through 2020. The Italian government's use of a ‘declaratory procedure’ also means that the Withdrawal Agreement will automatically provide lifelong rights to British ex-pats legally resident in Italy before the end of 2020, for as long as they remain legal residents thereafter.

HE Morris is confident that the areas of ambiguity that remain will be resolved, given that “the prospect of a no deal has fallen away.” She urged those listening to sign up to the 'Living in Italy' page, the embassy’s main portal for information.