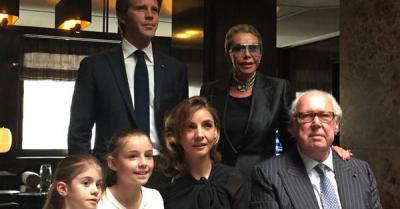 ROME – The ostensible pointlessness of disputes over the succession to the defunct crown of Italy does not prevent them being bitter, as Prince Emanuele Filiberto of Savoy is discovering in his attempt to put his daughter Vittoria, 16, in line for the throne of a country that has been a republic for over 70 years.

Emanuele Filiberto is the son of Vittorio Emanuele and therefore grandson of Umberto II, Italy’s last king before the monarchy was abolished by referendum in 1946.  In 2002, the exiled family were allowed to return to Italy on the condition of giving up all claims to a throne.

Emanuele Filiberto’s eldest daughter should be next in line after him, he argues.  “I will abolish the Salic Law.  My daughter Vittoria will become queen,” he said, quoted in Corriere della Sera.

The Salic Law, which excludes women from the line of succession, was written by Clovis, King of the Franks, in 495 AD and has frequently been ignored by other European royal houses it was supposed to apply to.

However, the Council of Senators of the Kingdom, led by Aldo Alessandro Mola, insist it must be obeyed.  They argue the law was present in the 1848 constitution signed by Carlo Alberto, and so cannot be modified unless the constitutional monarchy is restored.

“The laws of the only Royal House of ancient date, identical for centuries, do not change “to update to modern times,”” added Mola, quoted in La Stampa.  These so-called senators are also close to Amadeo, Duke of Aosta, who has long been a rival of Vittorio Emanuele in claiming to be the legitimate head of the family.  (At a Spanish royal wedding in 2004 Vittorio Emanuele allegedly punched Amadeo in the face.)

Some senators – led by Pier Luigi Duvina – are fighting on Emanuele Filiberto’s side, La Repubblica reported.  They point to the 2009 Treaty of Lisbon, which establishes equality between men and women.

The argument looks set to continue, not that this will concern the Italian republic very much.