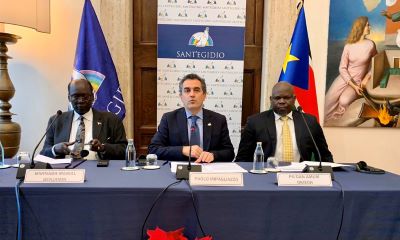 ROME – The political leaders of South Sudan have committed to a ten-point plan on the peace process for the country, presented at Rome’s Sant’Egidio Community on Monday.

The delegations from the Government of the Republic of South Sudan and the South Sudan Opposition Movements Alliance (SSOMA) met for two intense days of talks at Sant’Egidio to produce the document, witnessed by representatives of the SPLM/A-IO and NDM groups and with the Intergovernmental Authority on Development (an organisation of countries in the Horn of Africa area.)  It commits to a cessation of hostilities to come into effect on Jan. 15 - ending armed confrontation across South Sudan to create an environment in which the conflict can be resolved.

The Community of Sant'Egidio is a Catholic association dedicated to social service.

The document stresses the role of religious leaders in working to bring about peace.  The role of Pope Francis was particularly emphasised by speakers Barnaba Marial Benjamin, presidential advisor and head of the Government of the Republic of South Sudan’s delegation, and Pa’gan Amum Okiech, member of the leadership council of SSOMA and interim chairman of the Real-SPLM group.

In April, Pope Francis kissed the feet of previously warring South Sudanese political leaders, present at the Vatican for a retreat – an idea proposed by the Archbishop of Canterbury, Vatican News reported.

The agreement is an important step towards the December agreement between South Sudan's President Salva Kiir and rebel leader Riek Machar to form a transitional unity government by February, Vatican News said.

“We are completely in agreement,” said Benjamin at the press conference presenting the document.  “Peace is consolidating in South Sudan.”  He acknowledged that “Rome was not built in a day” but sounded hopeful, saying that the opposing groups would build peace by “agreeing with one another.”

It is “their country too, as much as it is ours,” he said, referring to the opposition groups.  “Let us commit ourselves to peace.”

Pa’gan Amum spoke about inclusivity, and making South Sudan a peaceful country, a home for all, through taking account of all.  He said the parties had agreed to begin a process of dialogue to find the “root causes of the problem” and to reach a “comprehensive solution.”  SSOMA was present “without any precondition” ready to help bring about a “just peace” he said.

Unlike previous agreements (SSOMA refused to sign the peace agreement of Khartoum in 2018), in the Rome declaration the parties had “agreed to address all the root causes of the problem,” he said.

The document states that “the dialogue shall continue under the auspices of Sant’Egidio in consultation with IGAD and with the support of regional organisations and the international community” and requests Sant’Egidio “to convene a meeting with IGAD, as soon as possible, to discuss issues related to monitoring and verification.”

In addition to committing to the peace process and to dialogue, the document explicitly recognises the suffering caused by the civil war to the people of South Sudan, and reaffirms a commitment to allowing humanitarian aid to help those affected by both conflict and natural disaster.

In late 2019 areas of South Sudan were hit by devastating flooding, which also destroyed food supplies.