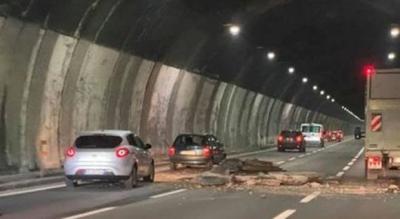 Two months before the 30 Dec. collapse of part of the roof of the Berté tunnel on the A26 in Piedmont, the Superior Council of Public Works had written to a number of authorities including the Ministry of Infrastructure and Transport saying 105 tunnels spread throughout the country on motorways managed by Autostrade per l’Italia (Aspi), were at risk, La Repubblica reports.

A further 90 tunnels managed by other operators are also at risk of incident and collapse, La Repubblica says.  The tunnels are subject to water infiltration or lack security systems, emergency exits, CCTV or fire alarms, among other problems.

The Ministry of Infrastructure and Transport has put in place some emergency measures such as speed limits, increasing the maximum distance between vehicles, and precautions against fire.

On Thursday, the Five Star Movement ruling coalition party said that fines were not an acceptable alternative to the revocation of Autostrade’s concession following the collapse of the Morandi Bridge, which killed 43 people in August 2018.