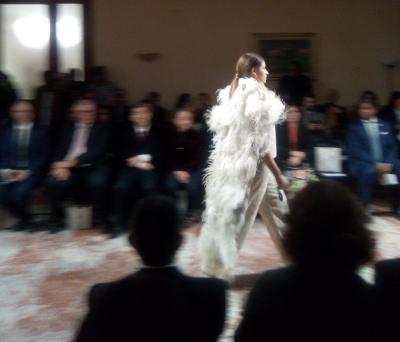 An outfit at the show

ROME – Part of the Embassy of Pakistan in the Eternal City was transformed into a dazzling fashion catwalk this week as students of the Pakistan Institute of Fashion and Design showed off their creations to an audience of diplomats.

The clothes were almost uniformly “high fashion” in the sense of statement pieces designed for fashion shows rather than everyday life.  This allowed the students to be particularly imaginative with the looks they created, making use of feathers, wires, embroidery and ribbons to name only a few of the materials transformed into unique outfits.

There was an impressive range of styles on display too, ranging from wet-look black plastic gloves to a complex gown with a six-foot train, one of several pieces which got its own round of applause when the model appeared wearing it.

Thirty minutes of a professional show featuring very striking clothes left the audience in no doubt of the talent of the young designers.  “This is the new Pakistan,” announced the Pakistani Ambassador, Nadeem Riyaz, as they came out to take their bow to extended applause.

It was noted that the students had spent “anything between three to six months” on the clothes.

Ambassador Riyaz had opened the evening with a speech stating that he would be leaving his Italy posting shortly.  He spoke for several minutes about how he had found Italy beautiful and welcoming, saying that he had had “a good innings” as ambassador here.

He sketched out the diplomatic ties between Italy and Pakistan and emphasised their strength, before handing over to Ambassador Elisabetta Belloni, Secretary General of the Ministry of Foreign Affairs and International Cooperation, to inaugurate the event.

She praised Ambassador Riyaz for his work and spoke particularly about fashion, mentioning her experiences of determined half-hours of shopping in Pakistan when working there.  She was presented with a shawl and a stunning embroidered jacket designed for her.

The fashion show was followed by singing from a choir, who had also sung while guests were arriving.  An operatic solo of “Ave Maria” was a particular highlight of their set.