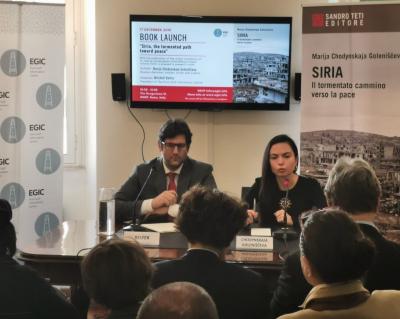 ROME – A pragmatic approach making use of local powers and groups with practical influence in the area is essential to bringing about an end to conflict in Syria, Russian diplomat Marija Chodynskaja-Goleniščeva has argued.

Speaking at the European and Gulf Information Centre (EGIC) in Rome on Tuesday on the occasion of the launch of the Italian translation of her book Syria: The Tormented Path Towards Peace, Dr Chodynskaja-Goleniščeva explained how Russian cooperation with Turkey – which has power in the area – had brought about change while its work with the United States had not.

In slightly Cold War terms, she explained the reasoning “if the two global powers agree everyone will follow” and how this had failed in Damascus – “No way.  Nobody followed.”  Not until Russia had used local partners had any progress been made on the situation there, she said, and the same was true of Aleppo.

In his introduction to the discussion event, EGIC president and director of research Mitchell Belfer described her book as “a very thick brick of information” and highly relevant today – “Here in Italy we should never forget that we share the same body of water [as Syria]” he said.

For her part, Dr Chodynskaja-Goleniščeva said the work was “Not a book where you can find a lot of Russian official positions because that is boring and you can find that on our minister’s website.”  Instead, she described the book as “Syria from my eyes” and her attempt “to explain behind the scenes,” following her shorter book about Aleppo, published in 2018.

Dr Chodynskaja-Goleniščeva is an analyst as well as a diplomat, and has considerable experience on Syria.  She worked for seven years as a member of the Permanent Mission of the Russian Federation to the United Nations and currently follows Middle Eastern issues for the Russian Ministry of Foreign Affairs.

Her presence for the book launch, attended by a constellation of observers from Western embassies, is another indication of how the EGIC increasingly is at the cutting edge in the Eternal City of covering international affairs in the Mediterranean.

Chodynskaja-Goleniščeva’s argument as stated in discussion with Dr Belfer on Tuesday is that Russia got involved in Syria for the same reason as the United States – to prevent terrorism.  The five to six thousand Russian-speaking fighters meant a “real threat” of terror attacks from the “real risk that these people come back.”  Cooperation with the United States, however, brought few results until Russia had taken a pragmatic approach and started working with local allies who had real influence, she explained.

“To contain or at least to control the behaviour you don’t like, you have to cooperate,” she stated, saying that Russia had drawn on its Chechen experience.  With reference to Russia’s accommodations with Turkey, she admitted the country was “a difficult partner,” but useful, like Iran – “they project their influence on the ground.”

Dr Chodynskaja-Goleniščeva insisted that she was not making an official Kremlin statement, but critics might say her discussion with Dr Belfer could be called somewhat one-sided.  She stated that with Russian pragmatic tactics, Damascus had been brought under government control “without a bullet” in a “diplomatic success” but made no reference to the horrific human cost of Russian operations in Syria.  Amnesty International has accused Russia of violations of international law amounting to war crimes in its operations in Syria, and of obstructing accountability for those crimes.

This is not to let anybody off at Russia’s expense – the United States is also allegedly guilty of killing civilians, for example – but it should surely be acknowledged that military interventions, including these so-pragmatic Russian ones, have a terrible price.

Equally, while her view that Russian society is behind the intervention may well be true, does it necessarily follow that “the Russian liberal opposition represents mostly itself”?

Considering the future of Syria Dr Chodynskaja-Goleniščeva was more critical of Russia, though again taking the practical view.  “To win the war doesn’t mean to win the peace.”

“No revolution starts without reasons… but that doesn’t mean we can just throw away the political system” she said.   Russia had proposed constitutional reform, held the Sochi Syrian People’s Conferences, and the Syrian constitutional committee in Geneva was one of Russia’s “political babies”.  But the practical impact of all this was limited, not least because the committee does not include the Kurdish YPG – and “a constitution that doesn’t take on board the concerns of Syrian Kurds, this is not going to work.”  She warned also that by supporting a particular ethnic group, America was playing “a very dangerous game” in its erstwhile support for the Kurds.

Nor was she particularly hopeful regarding Libya, “a different case” to Syria as it had had little political structure to begin with.  “Officially everyone supports the political process… but on the ground people are doing what they are doing,” she said.  “You can organise a thousand intra-Libya talks, but that will not help.”

Constitutions simply written on paper mean nothing, Dr Chodynskaja-Goleniščeva and Dr Belfer concurred, citing the constitutions of the Soviet Union and the Democratic Republic of Congo – both of which were theoretically democratic – as evidence.

Against this background, it is hard to make a hopeful assessment of Syria’s future, even if one considers the Russian-backed victory of Assad forces against the rebels to be the lesser of two evils.