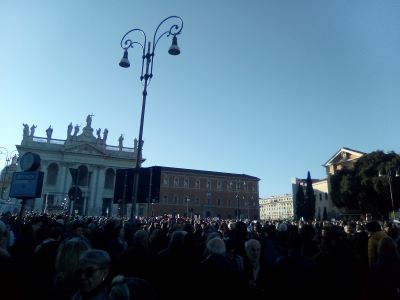 ROME – The Sardines look set to continue as a protest movement, issuing a new statement summarising their aims after a protest in Rome drew 100,000 people according to the organisers.

The Sardines leaders met Sunday with around 150 local organisers in Spin Time Labs, a sort of social centre near to San Giovanni, where Saturday’s protest was held.

The movement which began in Bologna with a demonstration against right-wing politician Matteo Salvini and his party the League shows no signs of slowing down.  A long Facebook post after the Sunday meeting clarified their future plans – they intend to keep campaigning, with dozens of initiatives in January, focussing particularly on Emilia Romagna and Calabria, where regional elections will be held in the new year.

They have stated that they will pay particular attention to small towns.

The Facebook post included a series of demands focussing on anti-violence, truth and transparency in political communication including on social networks and reconsidering controversial security decrees.

“Our objective is [to involve] more than one Italian in four,” affirmed Sardines leader Mattia Santori, following a Rai 3 poll which found one in four Italians might be interested in the movement.

The huge protest Saturday in Rome’s Piazza San Giovanni saw tens of thousands of people turn out.  The demonstration followed a pattern which has been seen across Italy in the past month – people of all ages gathering in protest but without political party symbols.  The only sign was the sardine, which was everywhere and interpreted a thousand different ways – handmade or printed, huge banners or badges pinned to clothes.

A stage had been set up at the corner of the square for speeches. Among the speakers was Carla Nespolo, president of ANPI, and Pietro Bartolo, known as the “Doctor of Lampedusa” for his work in treating refugees, La Repubblica reported.  However, Corriere della Sera said, the point of the protest was not the speakers, but the presence of all the people.

Speaking to journalists on Friday, Santori said that the movement had raised about 11,000 euros through crowdfunding to pay for expenses such as the stage and insisted that the Sardines would not become a political party – a refusal repeated on Sunday.

Instead, they are planning a number of new initiatives around Italy.  In addition to protests in areas with elections coming up, Sardine events will be organised in the Lazio region outside of Rome (which can overshadow concerns of the wider area) and a “Sardine relay” in Sicily to reach areas in critical situations, La Repubblica said.