RAI 'did not want to broadcast' interview with Assad 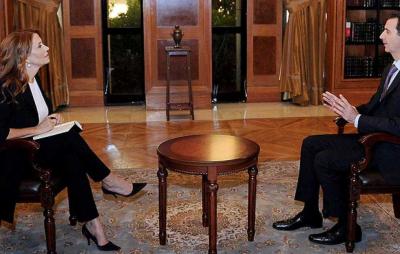 ROME – In an embarrassing episode for Italy’s public broadcasting company RAI, a journalist’s interview with Syrian president Bashar al-Assad which RAI allegedly did not want to broadcast became a source of conflict with Syrian authorities, news website Remocontro reports.

Journalist Monica Maggioni, 55, president of RAI from 2015 to 2018, had previously interviewed Assad in 2014.  She conducted another interview with Assad on Nov. 26, which RAI eventually put out on RAI Play.

This was only, however, after a standoff – in response to RAI not broadcasting the interview, Syria threatened to broadcast it on Monday, Remocontro reported.  Which they did.

“The interview with Syrian President Bashar al Assad, carried out by RAI Com's CEO, Monica Maggioni, was not carried out on commission from any RAI channel. Therefore a broadcast date could not be agreed beforehand. This was stated in a note by RAI CEO Fabrizio Salini,” RAI said on its website.

After the interview was broadcast on Syrian state media, RAI posted the interview online, on RAI Play – thus avoiding having to broadcast it on a television channel, Il Fatto Quotidiano said.

As Remocontro notes, few news agencies around the world would think they could broadcast an interview on home television with Assad.  He is accused of war crimes.

In the interview, Assad says that the European Union is supporting terrorists in Syria and that this had created the refugee crisis.  “Europe was the principal protagonist in creating the chaos in Syria,” he said.

Current president of RAI Marcello Foa has demanded clarification on how it all happened, while the trade union of RAI journalists (Usigrai) is asking for clarification on the entire chain of responsibility, Il Fatto Quotidiano said.

Senator Alberto Airola of the Five Star Movement, quoted in Il Fatto Quotidiano, described the incident as having created “embarrassment, discredit and even a diplomatic incident.”