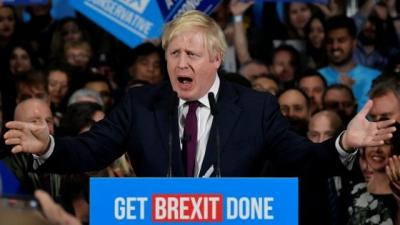 ROME – “The blue tsunami,” La Stampa labelled it, “collapse of the red wall” – the Italian media reaction to the UK election was dramatic reporting for a dramatic night.  Most papers agree the vote means Brexit will now definitely happen in some form and consider the election to represent a strong endorsement of leaving the European Union – “UK chooses Brexit” as Il Messaggero said.

“31 January of 2020 it will be Brexit,” agreed La Repubblica, whose headline today was “Europa bye-bye.”  “Dear pro-Europeans, this time it really seems finished.”

A Corriere della Sera report noted it was a “night of tension, if not of fear” for the 700,000 Italians living in the UK.  The Italian Conservatives association says there is no cause for concern, as “pre-settled status” can be registered via app.  But other Italian workers in London seem less sure.  “Marvellous cosmopolitan London risks becoming a place one leaves,” the Corriere said.

Italian newspapers also focussed on the loss of Labour’s traditional northern strongholds and what that might mean for the party – the question now is whether Corbynism survives without Jeremy Corbyn, La Repubblica said.

Aldo Cazzullo in the Corriere della Sera argued the EU now had to choose between an end to the monetary union or the closer European links that Britain had opposed in the past. Stefano Stefanini said in La Stampa that while the vote meant Johnson will have “his” Brexit on Jan 31, a real difference will not be felt until the end of 2020 when the risk of a hard Brexit will resurface.

On a lighter note, Il Messaggero and Corriere della Sera seemed taken with the “Dogs at polling stations” tradition, printing several pictures of dogs next to polling station signs, which British voters have been posting to social media on election days for some years now.