As Trump blusters, fewer adults in the room, EGIC hears 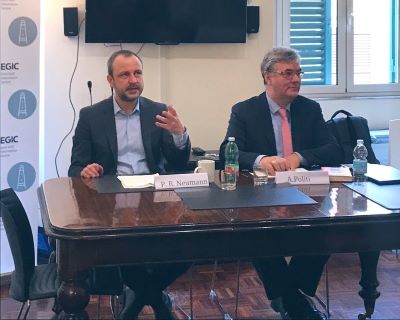 ROME – Donald Trump will seek to whip up racism and xenophobia among Americans increasingly as the 2020 election approaches, with potentially catastrophic consequences for the United States now being ruled by the first president not to distance himself from the ultra-right in over 50 years, respected King's College London conflict studies Professor Peter Neumann has cautioned.

Speaking with NATO Defense College Foundation director Alessandro Politi in a debate at the EGIC in Rome to launch his new book Bluster: Donald Trump’s War on Terror, Prof. Neumann noted that President Trump's bizarre habit of firing off wild tweets during crises could have unintended consequences provoking further problems, as was evident when Trump tweeted about the New York Halloween terrorist attack in October 2017, which killed eight people.

“What is really dangerous about Trump?” Prof. Neumann asked. “Trump is the first president since the civil rights era who has no red line with the far right, he has never called the Ku Klux Klan or the nasty far right terrorists.” Indeed Trump even once referred to the far right demonstrating in Charlottesville as “fine people,” an attitude that is a “really big difference” to previous recent presidents and to other Republican presidential candidates such as Ted Cruz who made it clear they did not regard them as fine people.

“Trump is quite happy to accept support from people who are basically against democracy,” Prof. Neumann said.

Prof. Neumann is Professor of Security Studies of King's College London’s War Studies Department and has served as Director of the International Centre for the Study of Radicalisation (ICSR) since he founded it in 2018.  Bluster is his most recent book of a total of seven.

Observers said the EGIC’s playing host to an academic of the calibre of Prof. Neumann underlines the extent to which the think tank is at the cutting edge of current affairs debate in the Eternal City as well as reflecting concern in the Gulf countries over the erratic nature of the Trump presidency with its unctuous support of Israel’s hardline policies that is obsequious to Israeli hawks even by the standards of the White House.

Prof. Politi, who has the chair of Geopolitics, Geoeconomics and Intelligence at the Italian Society for International Organisations (SIOI), has also been Chief Political Advisor for the NATO-led peacekeeping operation in Kosovo (KFOR) and is evidently a man who in the macho style of old-school NATO cold warriors is not afraid to wash down a thirsty morning’s debate with a large glass of sparkling prosecco.

Prof. Neumann considered also the risk of an accidental escalation in hostilities or tensions between communities that might be caused by a president broadcasting immediate, inflammatory messages as particularly worrying, including for people working within the State Department.  Trump’s tweets may be primarily intended for American supporters, but are of course read worldwide.

Neumann noted that Trump’s going over the head of the State Department to make direct comments on volatile incidents accompanies an inability to get his promises implemented as policies. This is partly due to a lack of loyal staff.

All U.S. presidents coming into office need to fill some 4,000 politically appointed posts to lead the massive Federal bureaucracy of as many as 2 million workers. Trump instead took maybe a couple of dozen people with him to the White House. The failure to make such appointments means that even today two-thirds of top positions in the State Department are vacant, according to Neumann.

One outcome of that lackadaisical approach was seen in Rome this year when the new U.S. Ambassador to the U.N. food agencies, Kip Tom, only arrived in situ a few days before the election of a new FAO director general. Unsurprisingly the U.S.-backed Georgian candidate who received virtually zero support from the U.S. Embassy was creamed in the election by the Chinese high-budget candidate Qu Dongyu and Washington had egg on its face for dividing the Western vote by not supporting the favoured EU candidate from France.

During his extensive research for his book interviewing Washington insiders, Prof. Neumann determined that many senior Trump administration jobs are being done by people who see themselves as serving the United States and its constitution rather than its President, no matter what they say publicly – people such as the writer of the anonymous op-ed “I am part of the resistance inside the Trump administration” which appeared in the New York Times in 2018 – and are deliberately blocking him.

Prof. Neumann was told “don’t ever listen to anything he says unless he’s reading from a script” by “a very senior member” of Trump’s administration.

Where Trump has managed to run things in the foreign policy sphere, it has been at great cost to the United States’ public image. “The U.S. withdrawal from Northern Syria sends a terrible message to potential future partners in the fight against terrorism,” Prof. Neumann said.  The United States used the brave Kurdish guerrillas as local partners in northern Syria to avoid committing American lives and resources – and then abandoned them, damaging American credibility.

What is perceived by acolytes as Trump’s condoning of outright racism and Islamophobia lends a sense of urgency, even justification, to those who go on to commit violent hate crimes. Since 2017 we have seen an increase of such hate crimes – and many perpetrators shout Trump slogans while committing them, Prof. Neumann added.

Many thought Trump would leave his extreme views at the door when he stepped into the Oval Office – but “there is no such thing as a moderate Trump.”  Indeed, with the 2020 elections coming up, we can expect things to get worse before they get better – Trump’s campaign strategy has always been to stoke fear and anger to win votes. It is a grim prospect.

It is often questioned whether Trump actually believes what he says, or indeed whether he believes anything. Prof. Neumann is convinced that he does – President Trump’s interviews from the 1980s to today show consistent positions on topics such as nationalism, China and free trade. The Islamophobia and racism, however, is visible only in his interviews since about 2010 – making use of the Tea Party Movement to get back into politics, according to Prof. Neumann.  Since then, he has surrounded himself with people who reinforce these beliefs, such as Steve Bannon.

What we are seeing now is not an increasingly erratic president, but rather one who has always been unpredictable and now has no filters – since the people who could previously exert some sort of control over Trump, like James Mattis, have now mostly left him, Prof. Neumann continued.

“Don’t like him, don’t hate him – diagnose him!  Or her,” was Prof. Politi’s suggestion for how to approach politicians. For Prof. Politi, Trump is a symptom of a United States deeply insecure about its place in a world order that it helped to create but no longer works in its favour.  Trump gives straightforward answers to questions over identity and future.  With no apparent alternative to Trump’s extreme and perhaps unworkable answers, this damaging insecurity will continue, it was argued.

Hoping – as Europe’s policy appears to be – that everything will go back to how it was before 2016 is futile, the speakers concurred.

As Prof. Neumann eloquently argued, it is only by cooperating with others and supporting global systems that the United States can hope to balance the rise of China in the future – a strategy for which Trump’s nationalistic rhetoric leaves little place.