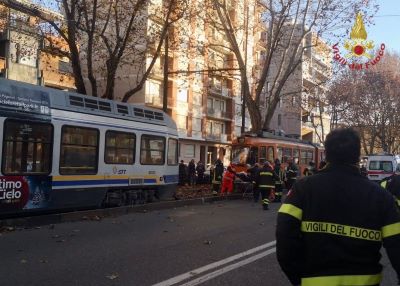 The trams crashed in Corso Tassoni, in the San Donato area of the city, on Monday.  Among the people lightly injured was a driver, said Il Messaggero.  One of the trams was out of service and therefore not carrying people.

Five ambulances, the police and firefighters intervened.  Other trams were diverted following the incident.

In Milan on Saturday morning a bus collided with a rubbish truck, severely injuring a woman who later died in hospital.  She has been named as Sheryl Ortega, 49.  12 others were also injured, Il Messaggero said.

According to the Corriere della Sera, camera evidence allegedly shows the bus (a number 90) going straight through a red traffic light at over 50 kilometres an hour, crashing into the rubbish truck which was also allegedly travelling at over the speed limit.

La Repubblica reports that an inquiry has been opened.