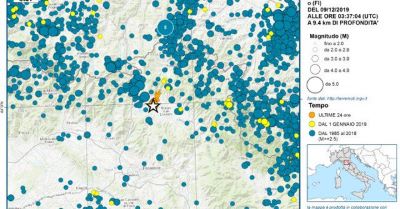 FLORENCE – An earthquake tremor of magnitude 4.5 struck Tuscany early Monday morning, the National Institute of Geophysics and Volcanology (INGV) has recorded.  There were no immediate reports of damage or casualties.

There have been over 35 earthquake shocks in the area in 12 hours, Il Fatto Quotidiano reported.

The strongest, at magnitude 4.5, took place at 4:37 a.m. Monday and was felt in Florence and Pistoia, INGV said.

The others were up to 3.2 in magnitude, Il Fatto Quotidiano said.

The earthquakes were from two epicentres, Il Fatto Quotidiano reported – Scarperia San Piero and Barberino di Mugello, both about 25 kilometres from Florence.

In response, all the schools in Mugello have been closed as a precautionary measure, local authorities reported.  Trains on the Milan-Rome line are seriously delayed.

There has been damage to several buildings at Scarperia San Piero and Barberino di Mugello, La Repubblica Firenze said.