Awards, TV and discussion at Women in Leadership event 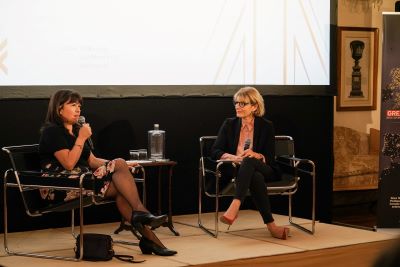 ROME – British Ambassador to Italy Jill Morris held a conversation with writer and television creator Daisy Goodwin about the topic of women in leadership in an inspiring evening at Villa Wolkonsky on Thursday.

Daisy Goodwin's latest television series is the critically acclaimed Victoria, a historical drama which began in 2016 and focusses on the life of the nineteenth-century queen.

Forming part of Jill Morris' "#Womenin" initiative, which brings together women in Italy and the United Kingdom working in areas considered to be male-dominated, such as defence and engineering, the evening also featured the opening of nominations for the third round of the “Women in Finance” in Italy awards.  These awards are designed to celebrate talented women and the value of diversity in the financial sector.

The first episode of the third series of Victoria was shown at the beginning of the event.  It was an hour of high drama featuring some exceptional acting, with a plot encompassing politics and family, royalty and Chartists.  The episode formed the starting point of Morris’ dialogue with Goodwin.

Beginning with female sovereigns and their exercise of power – considering current queen Elizabeth II as well as Victoria – the two women discussed power dynamics for women in leadership roles.  Morris noted the importance of Goodwin's portrayal of Victoria as a pregnant woman still in power, as despite the example of leaders such as New Zealand's prime minister Jacinda Ardern, pregnancy can even now be viewed as an issue for a powerful woman.

Goodwin said that Victoria, who had nine children while queen, exercised power as a woman, rather than acting - as Elizabeth I did - as a male sovereign would have done.  Although Victoria was "not in any way a feminist," as Goodwin put it, she argued that Victoria's presence and exercise of power still had an impact for women of that time.

Goodwin also noted the paradox of a female sovereign during the patriarchal nineteenth century, in which women who challenged society were defined as "hysterical" and could be locked up for having an affair, and women were, as she said, "victims of their biology."

Jill Morris, as the first female ambassador to Italy, has an insight into the challenges of being a woman in what has historically been a sphere dominated entirely by men – but so too does Goodwin, as female directors and screenwriters are unfortunately all too rare, even today.

The conversation took into account the Italian context, as when they focussed on the implications of language – in Italian, where nouns are gendered, female forms of nouns such as minister and lawyer are a contested point.  Yet language can reflect gender disparity in English too – as Goodwin pointed out, we are accustomed to hearing about “women writers,” but male authors are simply referred to as “writers.”  She herself had refused to put "CEO" on a business card, preferring instead "Head Girl" in a refusal to adapt to traditional language and power structures.

In many ways the characteristics associated with power are still those associated with men, and female leaders are still held to higher standards.  One point raised in the discussion was the way that female politicians are judged on their appearance and families in a way that male politicians are not - and often adapt to expectations, for instance lowering their voices to avoid seeming "shrill," a pejorative term used only about women.

Although dealing with grave issues, this was an evening of positivity, celebrating women and demonstrating just how far we have come since the days of Queen Victoria in achieving gender equality – and an event that raised plenty of laughs as Goodwin and Morris tackled a difficult subject with wit and determination.