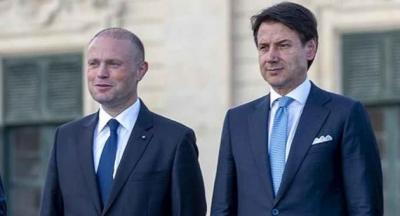 ROME – The Italian Prime Minister has apparently cancelled a lunch meeting with Maltese Prime Minister Joseph Muscat that was due to be held Friday in Rome, The Malta Independent reported.

Sources confirmed to The Malta Independent that Muscat’s scheduled meeting with Prime Minster Giuseppe Conte was cancelled, although no reasons have been offered.

The cancellation comes as investigations continue into the murder of investigative journalist Daphne Caruana Galizia, a case which has shaken Malta’s establishment.

Muscat’s chief of staff Keith Schembri, along with cabinet minister Konrad Mizzi, resigned as the investigation – along with public demonstrations – unfolded.  Muscat himself will be stepping down in January.

Muscat is also scheduled to meet Pope Francis on Saturday.  On Wednesday, a group of 22 academics asked the pontiff not to meet the prime minister, whose government has been badly shaken by the ongoing Caruana Galizia case.

It is “totally unwise, and pastorally undesirable, to involve the Holy Father in a propaganda exercise in an attempt to postpone an inevitable outcome,” said the letter, quoted in The Times of Malta.