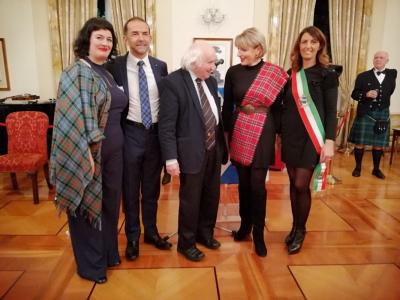 ROME – A party for two hundred guests was held at the British Ambassador’s Residence in honour of St Andrew’s Day, featuring Scottish traditional dances and music.

Andrew is the patron saint of Scotland (and many other countries) and St Andrew’s Day falls on 30 Nov. each year.

At the event on Saturday guests were welcomed by British Ambassador Jill Morris, who also remembered the London Bridge attack on Friday in which two people lost their lives.

“The best way to respond to violence is to continue your life.  Having what happened in your heart and mind,” the ambassador said, Il Messaggero reported.

Among those present at the event, Il Messaggero said, was Caterina Campani, the mayor of Barga, a town of about 10,000 people near to Lucca in Tuscany.  Barga has a long history of association with Scotland and many people there have Scottish relatives – in honour of the link, the town holds a fish and chip festival each year.  60 per cent of the town’s citizens have Scottish relatives or links, the ambassador said, quoted in the Giornale di Barga.

Also in attendance was Richard Demarco, a Scottish artist and promoter of arts who has been made a Cavaliere of the Italian Republic, and Ronnie Convery, Italy’s honorary consul in Glasgow, Il Messaggero reported.

The event was held at Villa Wolkonsky, the British Ambassador’s official residence in Rome.  Located in the San Giovanni area, the villa is particularly noted for its beautiful gardens.