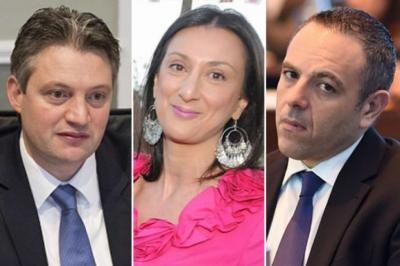 LA VALLETTA -- Konrad Mizzi and Keith Schembri resigned their positions as cabinet minister and prime minister's chief of staff respectively on Tuesday, as the arrest of key figures in the slaying of blogger Daphne Caruana Galizia rocked Malta's political establishment.

Economy minister Chris Cardona has suspended himself until ongoing investigations were concluded, The Times of Malta said.

Dr Mizzi said "It is my duty to step down from minister so that the government will have the serenity to continue for its full term," Malta Today reported.  He will keep his seat in parliament.

Mr Schembri has resigned his position as chief of staff of Maltese Prime Minister Joseph Muscat, the premier of the troubled archipelago told journalists earlier on Tuesday.

The announcement came as sources revealed to the Times of Malta that Mr Schembri was being questioned at police headquarters by investigators working on the car bomb murder of ms Galizia in 2017.

Dr Muscat declined to comment on those reports, saying he was not privy to investigation details.

Sources have said that businessman Yorgen Fenech, arrested last week on his yacht as he sought to flee to Sicily, had made several claims linking Mr Schembri to corrupt deals as well as Caruana Galizia murder middleman Melvin Theuma.

Mr Theuma is understood to have audio recordings of conversations in which Mr Schembri is mentioned.

Sources told the Times of Malta that Mr Fenech - a prominent businessman who until last week served as CEO of the Tumas Group - had also told police that Mr Schembri knew middleman Melvin Theuma and that he had set up a meeting between the two to secure Mr Theuma a government job.