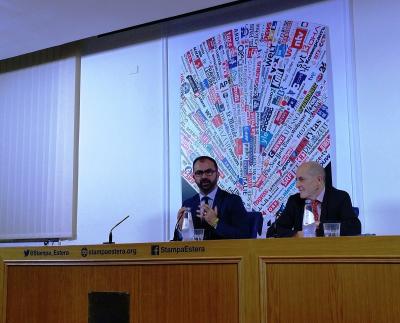 ROME - The newly appointed Minister for Education, Lorenzo Fioranonti, 42, of the Five Star Movement, an economist and university lecturer, was recently invited to the periodic meetings that foreign media correspondents have in Rome with governmental or political representatives.

His meeting with journalists in the crowded Foreign Press Room resulted in a very broad and documented overview, with questions and answers, on the problems that affect the national education system.

Having the minister touched the point of the scarce salary correspondence of the Italian professors, defined by him as "civilian heroes", in the face of heavy commitments and non-negligible educational responsibilities, the writer asked him if a certain recognition for this value should not come from a salary adjustment, given that they are among the worst paid in Europe, taking the example of Finland, where a teacher is better paid than a physician.

The minister replied stating that he was pleased to speak with someone "who knows about Finland, since I studied the Finnish system and even visited that country twice and I think it is the most interesting system in the world even if some international studies place it always among the first places. If it is necessary,” said the minister, the adjustment of salaries is not less the enhancement of the role of teachers, "because in Finland they are not only paid more but there is also a cultural enhancement of the role of the teacher. That is, who has the ambition in life to want to be an educator, has the opportunity to do so," where, continued Fioranonti, “we see the opposite here that the culture of the country tends to discredit certain professions to the point such that those who want to develop that personal and professional ambition are discouraged because they are associated with a negative cliché, being considered inferior compared to other professions.”

In this regard, Fioranonti emphasized that he instead considers the role of the fundamental teacher as being the person who shapes the future and to whom our children are delivered for most of their lives. "It is paradoxical to deliver the most important people we have to an institution that may be is dilapidated and to teachers that do not receive the same appreciation they receive in other countries and that they deserve."

But the references of Fioramonti to the Finnish model, well known throughout the world, have been varied and on various occasions. In some interviews, for example, he stated that he wanted to focus on a quality school, explaining that "in Finland, for example, the school timetable has been reduced, making transversal lessons, inserting new technologies in a fun and engaging way and thus making mathematics more accessible to all. " And just to try to import the Finnish model, he stated that he had opened worktables on this goal.

Fioramonti did not fail to mention the innovation that has been much revived at the level of international media: that Italy will probably be the first country to introduce environmental education into school programs, a teaching for 33 hours per year that will be operational by September included in the civic education course, a subject that will be the subject of a final vote. "It is a law of the state that gives the ministry of education the obligation to structure this teaching and we are doing it in this direction and without additional costs because such teaching will be inserted in subjects that already exist. The costs only concern teacher training, and in January and February training courses will start for teachers who will cost 10 million euros," the minister concluded.

Facing the issue of school building, largely made up of many dilapidated or maltreated buildings, he said it was a major issue and also a very contradictory topic because, although there are insufficient funds, they are nevertheless important, being around 10-11 billion of euros between EIB mortgages, structural financing and public financing. What hinders the investment of these resources is the division of competences between local authorities, regions, municipalities and provinces, which often delays or blocks the use of these funds.

The minister then informed that, just to try to speed up these procedures, he created a 'task force' of 86 technicians throughout the national territory: technicians, architects, accountants, on the whole administration and project management experts as well as implementation experts of public works to support small or unprepared local authorities in the preparation of procedures for the execution of public tenders and maintenance of buildings or construction of new ones.

For this purpose, a new school building registry was also created, which can also be found on the MIUR website containing all the data and documents. https://www.istruzione.it/edilizia_scolastica/index.shtml

Overall, the minister appeared at ease and well prepared, managing to navigate deftly between often insidious questions from various foreign media colleagues. He also consented to individual interviews of some media, answering in English or Spanish fluently and without hesitation.

Unfortunately, it does not often happen in Italy that a minister deals with a sector that is congenial to him, but this did not seem to be the case with Mr. Fioramonti.