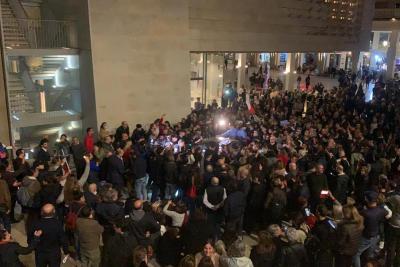 The politicians leaving Parliament on Wednesday in the car were surrounded by the protestors, who also banged on the roof of the car.  A police officer appears to have been injured when the car, attempting to move off, ran over her foot, The Times of Malta said.

Eventually, former Leader of the Opposition Simon Busuttil walked slowly in front of the car to clear the way.  The car was blocked by protestors again shortly afterwards in a street near to the Auberge de Castille, which houses the Prime Minister’s Office, but was only stopped for a few minutes, The Times of Malta said.

Hundreds of anti-corruption protestors gathered outside parliament calling for justice for Daphne Caruana Galizia, the investigative journalist murdered in 2017.  Organised by civil society groups such as Occupy Justice, the protestors carried placards with her image.

At the end of the protest, Busuttil placed a small placard on the door of the Auberge de Castille.  It read “the truth will out”.  Protestors then lit candles at a memorial to Caruana Galizia, Maltese media reported.

Many then gathered outside Parliament where they chanted 'barra, barra' (out, out) and 'Mafia, Mafia'.

The civil resistance groups are calling for the resignation of Prime Minister Joseph Muscat and the removal of chief of staff Keith Schembri and tourism minister Konrad Mizzi, both of whom were implicated in the Panama Papers.

Schembri and Mizzi have links to 17 Black, the secret fund of Yorgen Fenech, a businessman arrested onboard his luxury yacht early Wednesday morning.  The arrest is widely supposed to be linked to the murder of Caruana Galizia, who had denounced 17 Black and worked exposing corruption.