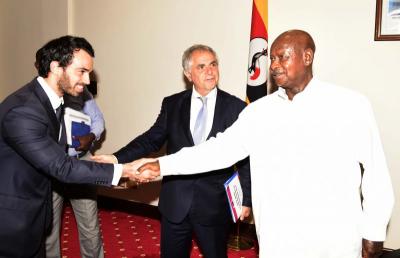 ROME -- A senior Italian Food and Agriculture Organization executive's bid to become No 2. man at the troubled UN agency has been thrown into question amid concern over a potential conflict of interest posed by his drumming up business for a company owned by his son and his connections to a development cooperation trade fair held at the Fiera di Roma, FAO sources say.

Starting in 2018, Roberto Ridolfi, a former EU bureaucrat and specialist in Ugandan affairs who was then a senior consultant to the FAO, used his extensive contacts in Italian business, Brussels and elsewhere to help raise funds for the Exco 2019 fair that was held with participation by as many as 72 countries from May 15 to 17, as well as stands erected by the FAO and its sister agencies WFP and IFAD, the sources told the Insider.

The Exco 2019 event was a joint venture between Fiera di Roma and an Italian Company, Diplomacy, while a 10 percent stake was offered to Ridolfi's 26-year-old son Francesco through his company Sustainaway.

Ridolfi senior continued to work as an 'apri pista' for the event this year, however, after his appointment as an Assistant Director General of the FAO, contacting pals at big companies such as Barilla, Banca Intesa and ENEL to obtain attention and money for the event, the sources added.

While Francesco Ridolfi in the end stopped short of signing the joint venture agreement, he reputedly requested a commission from the sales staff whose job was to conclude sponsorship contracts for Exco 2019 once the FAO ADG had made the initial contacts, the sources added. FAO member states being lobbied by Italy to back his bid for the powerful DDG post are sure to ask whether Ridolfi use his exalted position at FAO to pave the way for his son to receive commissions.

In all Exco 2019 received an estimated 700,000 euros in stand sales and sponsorships. It is not known if and how much commission was paid in turn to Francesco Ridolfi, whose company was started July 2018 in order to participate in the Exco joint venture. Ridolfi senior could not be reached for comment.

Francesco’s brother Riccardo for his part has extensive business interests in an electric power company based in Uganda, where his father was EU ambassador, doing business in the African country as well as in Zambia, Kenya and Rwanda.

Ridolfi senior’s appointment as an FAO ADG was at request of the EU Commission that reputedly increased its donations to the FAO in return for making space in the top leadership team for unctuous Ridolfi, who began his career at the Fiera di Napoli before he became a high-level Eurocrat, FAO sources told the Insider.

In a statement Friday the Fiera di Roma underlined that FAO, WFP and IFAD did not pay to participate in Exco and claimed Sustainaway had 'no economic participation' in Exco.

"The UN agencies mentioned in the article as sponsors of event Exco 2019 allegedly through assistant DG of FAO Roberto Ridolfi in reality did not pay in any way for goods or services received for the event ..." the Fiera said in a statement.

Fiera di Roma in its statement went on to say that "... we want to rectify that Sustainaway has no participation to brand or trademark of EXCO nor any right to Exco and therefore has no economic participation to the economic results of EXCO."

In another development, Mr Ridolfi's lawyer Avv. Mario Di Giulio, contacted Insider requesting what he claimed would be a correction of the article under article 8 of Italian Law no. 47\1948.

"An article, the contents of which is misleading and damages Mr Roberto Ridolfi's dignity, image and role, was published on Nov. 20, 2019 on the website "The Italian Insider," said rth

"Mr Roberto Ridolfi, in his institutional role, carries out, among many others, activities aiming at promoting the visibility, standing and impact of public agencies such as FAO. These may include the advice and support on the conception and the organisation of conferences and events concerning development of international cooperation among countries, international organisations and other private and public entitites. Mr Ridolfi always operated in a serious correct and proessional manner; he did not promote any business for his relatives and he is not aware of any profit sharing due to (or monetary claim by) Sustainaway in connection with the organization of the event 'ExCo 2019,' as he has received extensive reassurances on this."

"Furthermore, as it has been confirmed to him by Fiera di Roma and can be easily assessed through the relevant public register, Sustainaway has no participation to the EXCO brand or trademark nor any right toward EXCO and therefore has no link whatsoever with the economic results of EXCO events."

"Mr Roberto Ridolfi furrthermore underlines that FAO did not pay any charge in connection with the participation to the event 'ExCo 2019' which was a great success for FAO, government as well as the development community at large."

"The artifical and misleading reporting of roles by members of his family with totally independent positions and operating in different continents is also extremely damaging and defamatory," Avv. Di Giulio claimed.

Avv. Di Giulio said he "formally and strongly request you to publish immediately this letter of rectifcation of such article and to refrain from publishing other articles untrue and damaging dingity and image of Mr ROberto Ridolfi or his family. I hereby reserve the right to set up the broadest and appropriate legal measures to safeguard my client's interests."

Italian Insider Editor in Chief John Phillips said: "We are happy to publish the letter of Mr Ridolfi's lawyer for the record. However we stand by our article on the affair which was true and accurate." 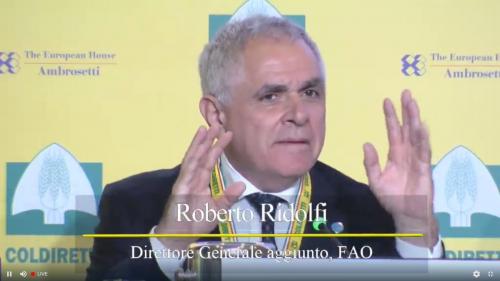