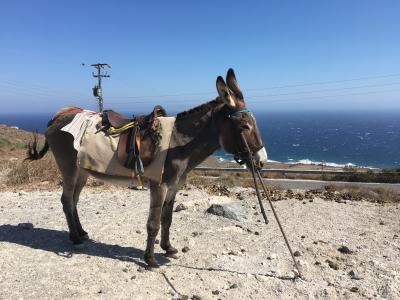 ROME – A new film published by PETA Germany reveals that donkeys and mules are still being beaten and exploited as “taxis” on the Greek island of Santorini, carrying tourists in defiance of the law.

In 2018, following a global appeal by PETA Germany and its international affiliated associations, the Greek Ministry for Rural Development and Food banned people weighing over 100 kg from riding the animals.  However, the film of Sept. 2019 shows how the animals are still being mistreated and used to carry tourists over the weight limit.

Following this investigation, PETA is asking Greek legislators to introduce an absolute ban on the rides.

The donkeys and mules carry tourists up and down the 500 steps to the old town of Fira.  As PETA points out, there is a perfectly working cable car up to the town.

“It is shameful that tame animals such as donkeys and mules are still whipped and marched to exhaustion, forced to work day after day without any relief from the scorching sun," says PETA director Elisa Allen. "PETA addresses tourists with the request to avoid such horrible and cruel practices, and urges the Greek authorities to intervene and end this abuse."

The film shows the animals suffering from open sores, and that inadequate saddles cause them injury.

It also records that many animals trip, often after being hit by the donkey handlers, which puts tourists on foot nearby at risk.

When not carrying tourists, the animals are often left out in the sun without access to water or shade, and not fed throughout the day.

PETA is asking for signatures for its petition to end the practice of mule and donkey rides in Santorini completely.